On this page, you'll discover the meaning of compression (Chinshinho) and expansion (Fushinho). How to apply it to your movement. Plus methods to develop your skill.

There is a famous phrase for Wado: “Wa Suru Ten Chi Jin No Rido”.

Roughly translated it means that the reason or the truth of Ten, Chi and Jin lies in the connection and the harmony between them. For Wado, Ten Chi Jin is generally a philosophical issue. 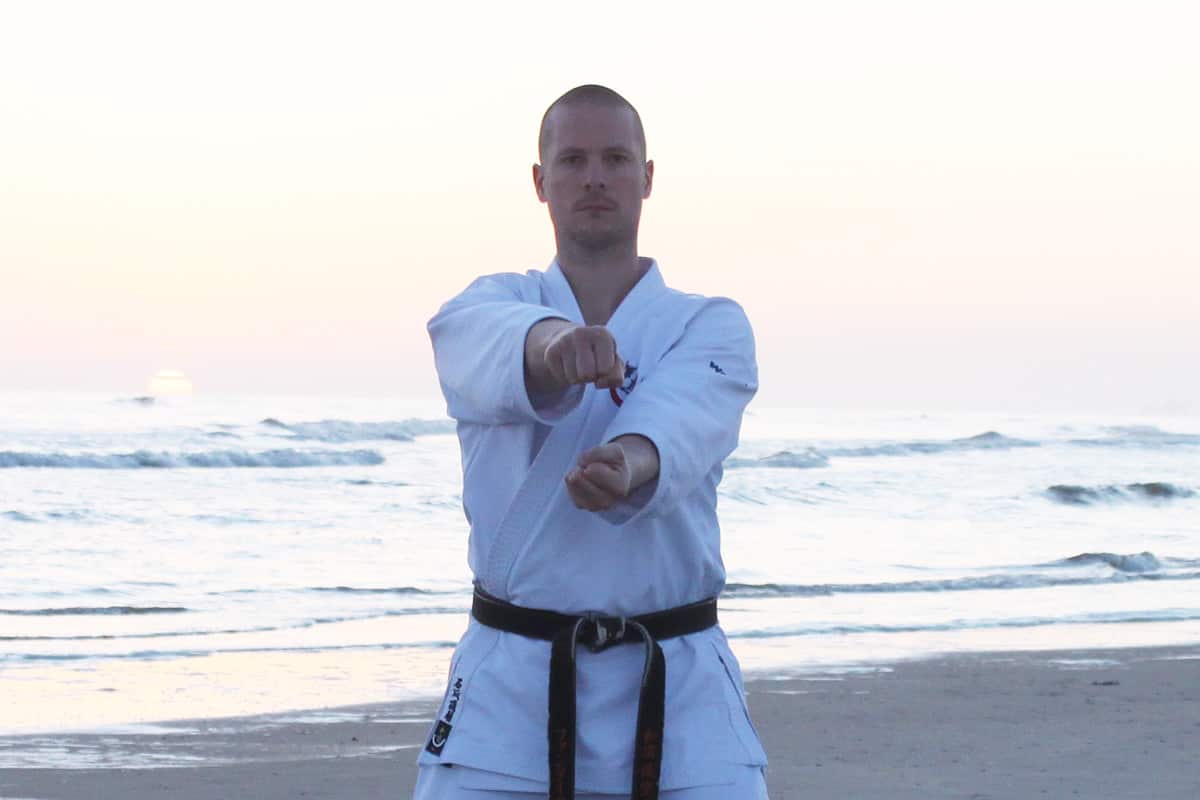 Think about it... if Karate techniques draw power from twisting your hips. How does that work for Morotezuki?

Interestingly, as Yokoyama sensei (Okinawan Shorin Ryu) told me, the body can also be divided in three parts from side to side. In the old days this was also referred to as Ten, Chi, Jin.

Usually, we consider that the body can be divided into a left and right side, dividing the body from top to bottom, so this is quite a unique way of thinking.

Here's how that works

You can use Ten Chi Jin to increase your power output through compression.

How? Lower your ribcage instantly with a short explosive movement. 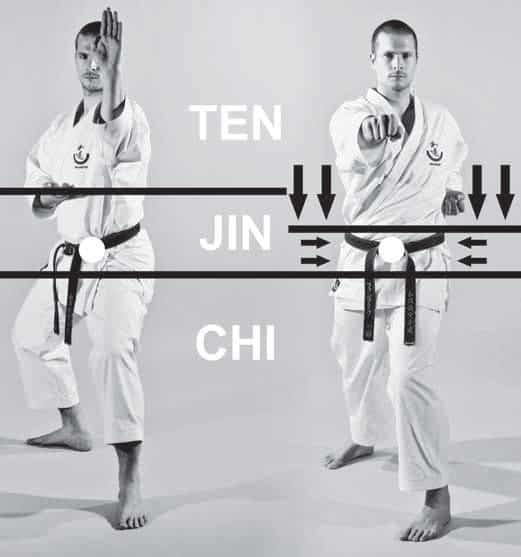 The image roughly represents how the body can be divided into three parts.

In older Martial Arts books such as Karatedo Taikan it is written that you have to "put strength in the lower abdomen".

On the picture you can see how Ten compresses and squeezes the Jin area.

Shuto uke is shown after kime, so at a relaxed moment where Ten, Chi and Jin are in their normal state. Compressing the area creates explosive speed and power with internal muscle is showed with Gyakuzuki.

At the time when I wrote Wado No Michi, I purposefully picked this combination.

Check the legs too, they go from external to internal rotation.

With that said, let's dig deeper into Chinshinho 👇

how to use compression for power

Use "Chinshinho" — don't twist your hips.

No matter which Karate Dojo in the world you start, you learn to create power by twisting your hips.

This comes down to rotation. Rotational movement is from left to right in a circular manner — horizontal plane movement. Chinshinho and Fushinho however, are methods to create power in the up and downward direction: the vertical plane.

Before we dig deep into Chinshinho check this 1-minute principle video first to get crystal clear on the meaning.

is chinshin the same as vertical dropping?

The Kanji used for Chinshinho (沈身法) indicate that your body is going to lower. 沈 translates into sink or submerge. In English we use the term body dropping. When you drop, you should drop straight down in the vertical dimension facilitated by Hiza No Nuki.

Vertically out of Seichusen, not in a diagonal.

Another term that is used is Vertical dropping (my term), which emphasises the direction of the dropping movement.

Imagine you stand up straight and lean to a random direction. Your body falls and eventually diagonally down. This is a bigger distance than straight down. And it's slower.

Chinshin can be visible, so much that a beginner can spot it from miles away. It's done in a large movement.

It can also be difficult to detect up to invisible: you don't see a grandmaster perform basic punches with excessive knee bending. Or folding their chest clearly — they drop internally.

You have to learn body dropping first. Then move on to minimising your external movement to eventually refine your skills to internal body dropping level.

As Sakagami sensei told me several times: "The big includes the small, but the small does not include the big".

Within Karate, Chinshin 沈身 therefore has the meaning of explosive and immediate dropping of body weight.

The term vertical dropping refers to the perpendicular dropping of the body or actually the body weight.

The function of this technical ability is to increase impact and it is also a helping aid to maintain kinto. You can use Chinshin to:

You don't always have to drop deeply, like from Shizentai to Shiko dachi. It's a good way, and easy to learn. But eventually you need to drop with a smaller movement.

When you advance you need both the skill of dropping deeply AND dropping in a small movement — so you have a choice and can use either depending on circumstance.

how to generate power Key is to use Hiza No Nuki to drop your body weight.

Execute Hiza no nuki so your body drops drastically by gravity. You feel the weightless when you drop, and weight heavier when you land.

Weight is variable. Mass is constant.

Use Chinshinho to strike and take advantage of increasing weight and momentum to generate more impact.

As you progress this has to become part of your connected body movement: using internal and external power without the need to drop deeply.

The point is that all has to happen drastically with correct timing.

use chinshin to stop moving (how to)

Kick a ball and it rolls until gravity or another outside force stops it from moving.

The same applies in Karate.

When you move forward, you have to stop your movement. The problem is, nobody thinks about this a lot. The reason: it only starts to present itself when you move with your body...

If you simply step, your step stops your movement. But it's not necessarily contributing and helping you to put your body weight behind your attack. You're likely more robotic as well (instead of the smooth movement you're looking for).

When you get better at moving with your body it is essential to use Hiza No Nuki to drop vertically. After leaping forward big time you want to control your movement while striking decisively.

And what about this one?

As you are in Ukimi stage, how do you stop moving forward? Do you end up in a 2/3 1/3 weight distribution because of holding back and reaching out with your front foot?

You should do Hiza No Nuki in the supporting leg briefly and sharply so you can stop forward momentum and drop vertically.

So: Hiza No Nuki facilitates Vertical Dropping and prevents your body from being consumed by the momentum of moving in a particular direction.

To apply Chinshin in Sonobazuki, you can use the following method that I learned from Nukina sensei. Start from Naihanchi dachi with Hidari gamae and extend your legs. Do Hiza no nuki, let your body drop and execute Sonobazuki. Stretch your legs afterwards and repeat the movement.

There's also a variation that allows you to drop more deeply and is easier to learn. Furthermore, -apart from explaining Chinshin from a different angle- I share a nice little fact of Ishikawa sensei's experience with Ohtsuka sensei.

It's inside the video

To conclude, I would like to share the following variation on Sanbon kumite Jodan uke 1. Instead of using three steps, we will demonstrate this version as an Ippon kumite, executed from Hidari hanmi ai gamae.

It's not the stance that matters though...

What matters is body movement that causes the stance.

Ishikawa sensei used a leg switch using Chinshin visibly to control Maai and stopping the backward movement. If you use this way, it is easier to adjust to the movement of your opponent (who might enter deeply or fall short). As you move your body back, conciously use your lead hand to meet his attack half way. Move back as far as your supporting leg, so your legs are approximately below your centre. As you drop into Shiko Dachi by moving both feet dropping vertically - execute Nagashi Uke and Urazuki. Keep the Meotode alive and follow up with Chudan Gyakuzuki as you pull back and control with your left hand. 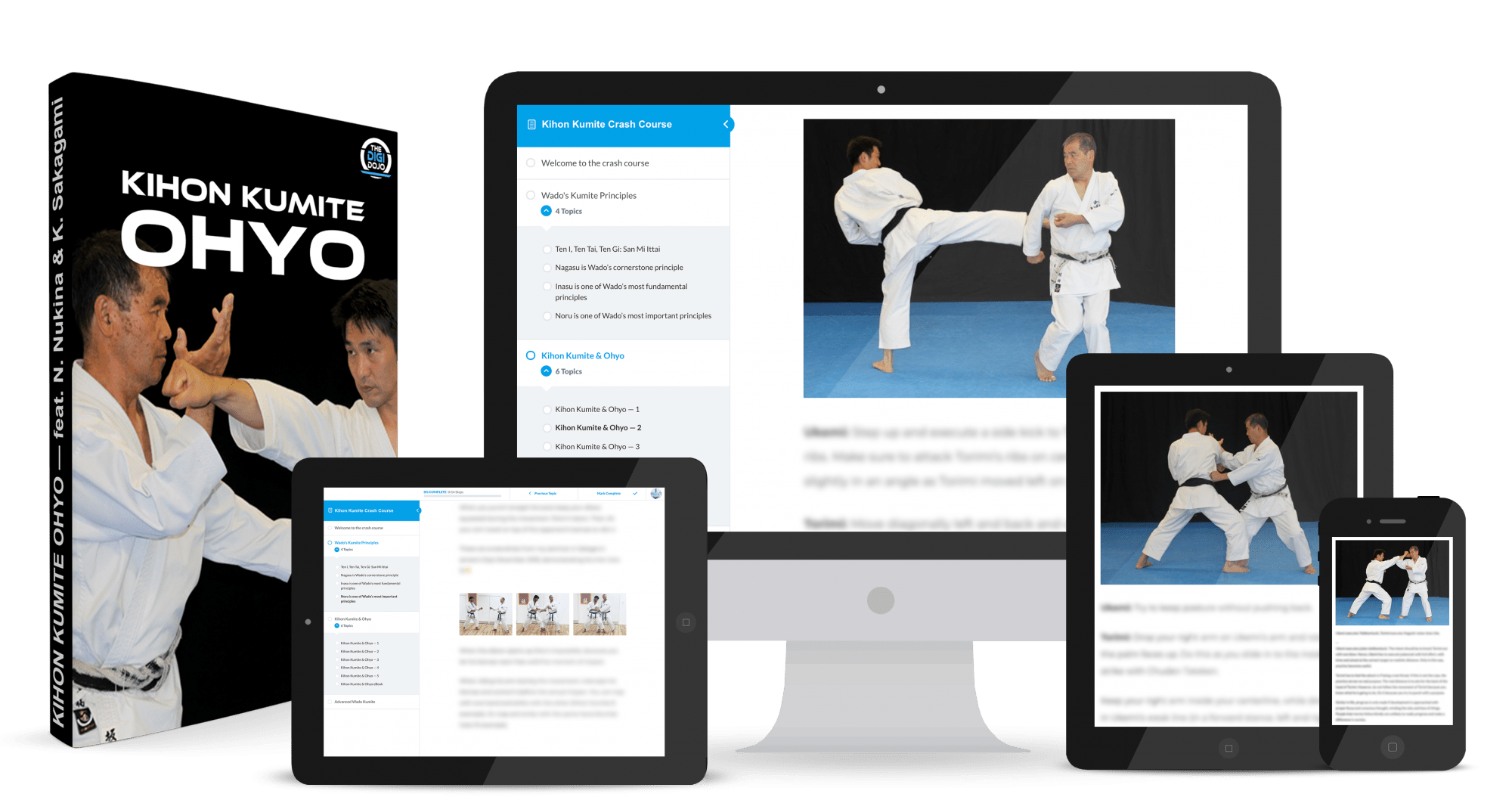 GET THE KIHON KUMITE CRASH COURSE

The term Fushin, which I learned from Kazumasa Yokoyama sensei, is not often used but essential to understand.

Forget about twisting your hips for just a second...

Rather, think about this:

Why you should twist your hips?

Generate power, right? Yes basically that's the reason. But twisting your hips (rotational energy) is not the only way to generate power. In fact, rotation may take too long and might not be effective in close-range.

In a way, rotational energy deals with generating power from movement in the horizontal plane. From left to right or the other way around. Literally.

Fushin is to create power by movement in the vertical plane.

For completeness, you can say Fushin-Ho. Let's have a look at the Kanji.

Fushin Ho is the method you use to generate power by making your body rise to the surface: in the upward direction. It's a different way of generating power compared to rotational hip movement.

For example, in Pinan Shodan. Connect the upward moment to Tettsui Uchi. So DON'T think of pulling your right foot and moving left: Think up.

Watch the video and imagine my Seichusen with arrows pointing up and down.

There are many ways to develop power.

Eventually movement should be natural, but it's very hard to do. The key to progress is to understand where you are now.

You can twist your hip, but can you twist sharply in a small movement?

You can drop, but can you drop drastically and time it perfectly with your technique. Is it useful for different moves?

Analyse your movement. And decide what you want to work on.

If it's compression or expansion, pick any of the methods above and get to it 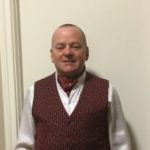 AJ shares knowledge that is next to no other instructor that you have seen on the internet. The videos compliment all aspects of the explanations, with easy teaching methods & a very articulate teacher no other than Sensei AJ van Dijk. It’s like having AJ in your own room as a private instructor. 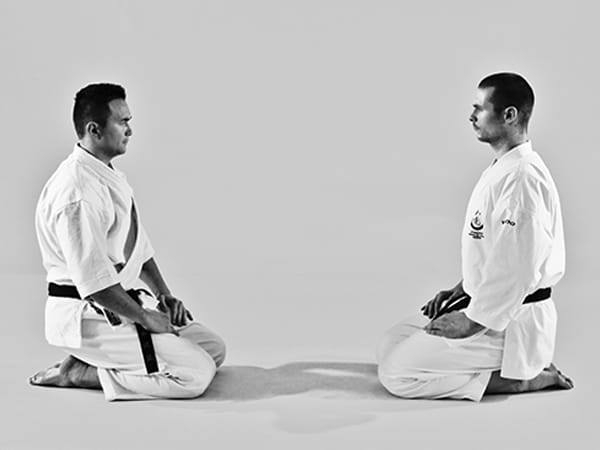 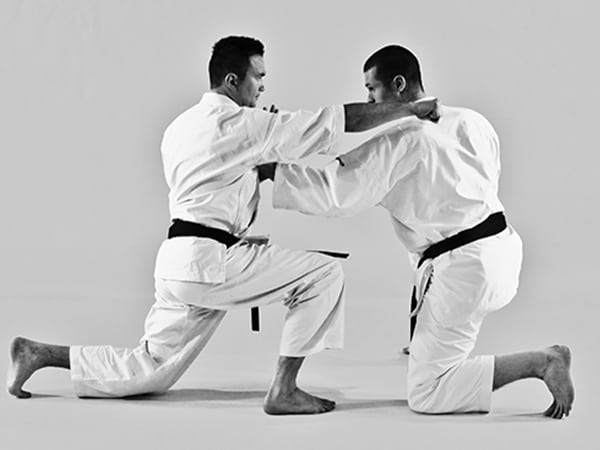