There are a number of myths, practical applications and fantasies about Hikite.

We can agree that myths and fantasies won't help your techniques right?

So now that we're on the same page...

There are 3 types of Hikite that enhance your techniques. Call it appearances if you will.

Hikite isn't only the pull-back hand as you know it... 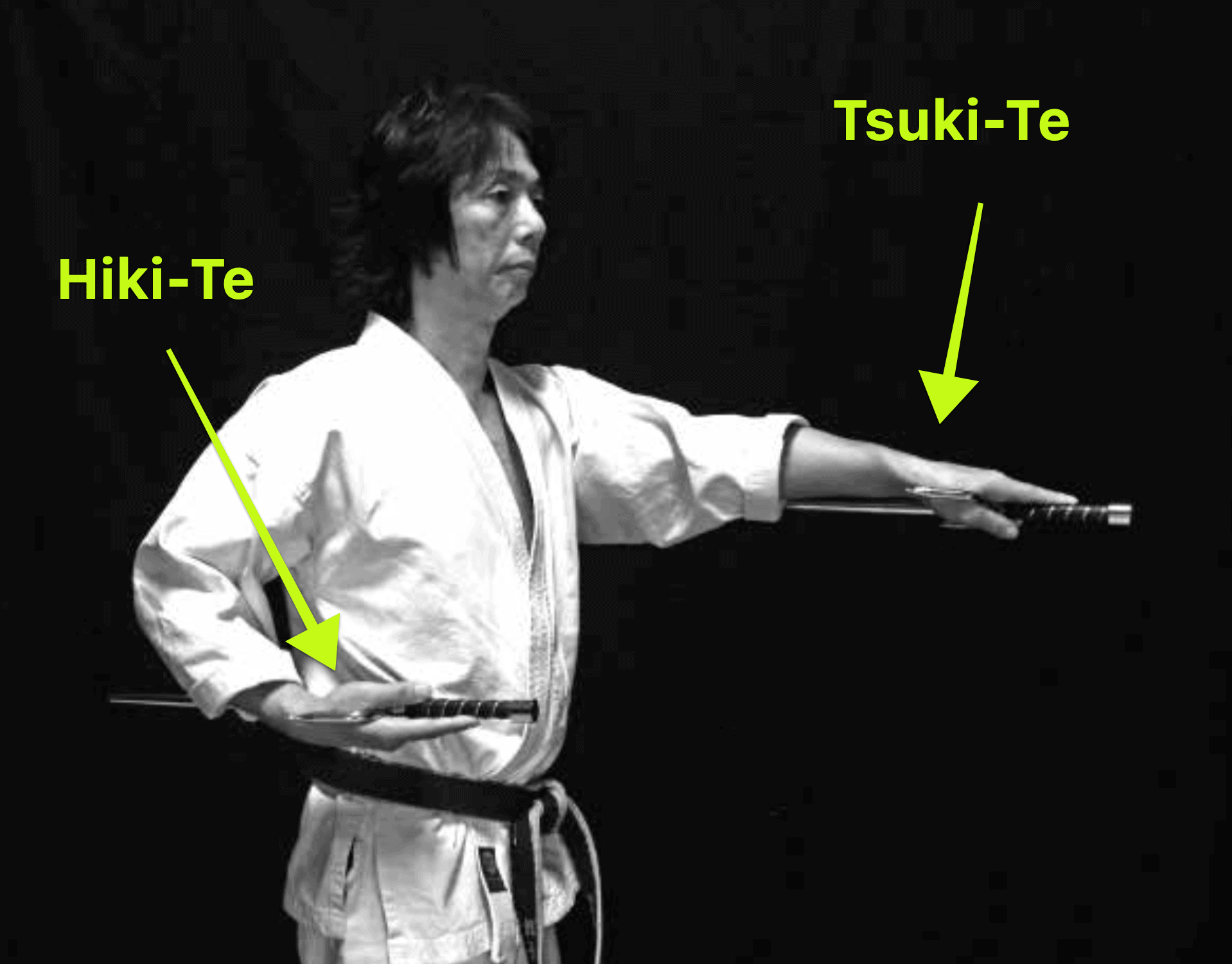 Although part of the same circle — Hikite has 3 types which you'll discover today.

Before we dig into the 3 types though ⬇️

引き手 or simply 引手 translates into knob, handle or catch.

In Budo the translation is usually the pulling back of the hand. Is this logic?

The common explanation of Hikite is to pull back your punch to the side of the chest. That said, Hikite refers to pulling back, but not necessarily a punch.

I'll eleborate in a sec. First, look at the axis of the Bo👇 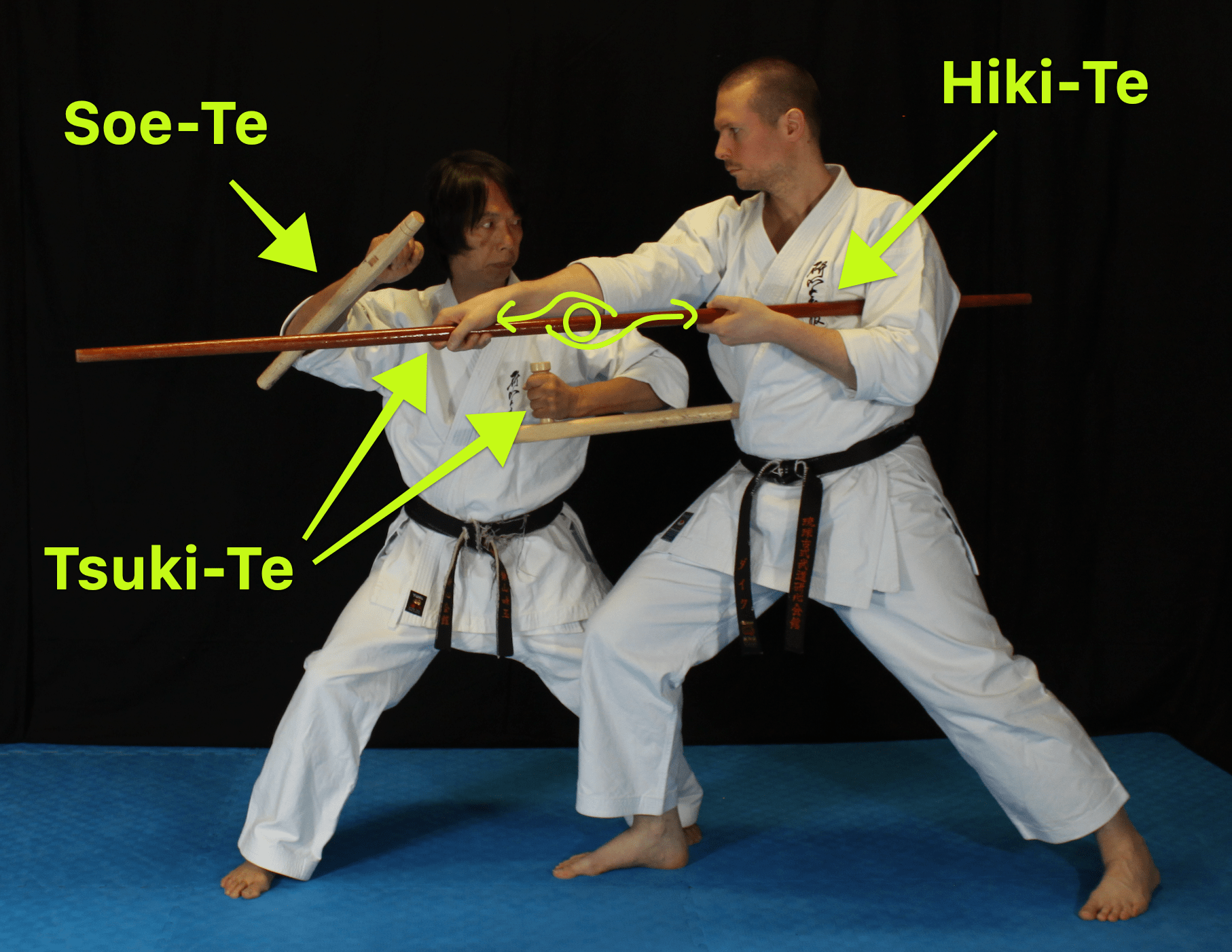 Hikite is your back hand, even if you don't physically pull back.

And there's another name too: Soete.

All Hikite is Soete — and vice versa.

Terminology-wise, sometimes Soete may be more appropriate to use. Other times Hikite.

But to truly get it, you need to understand deeply. On fundamental level.

From punching on the spot all the way to free application. 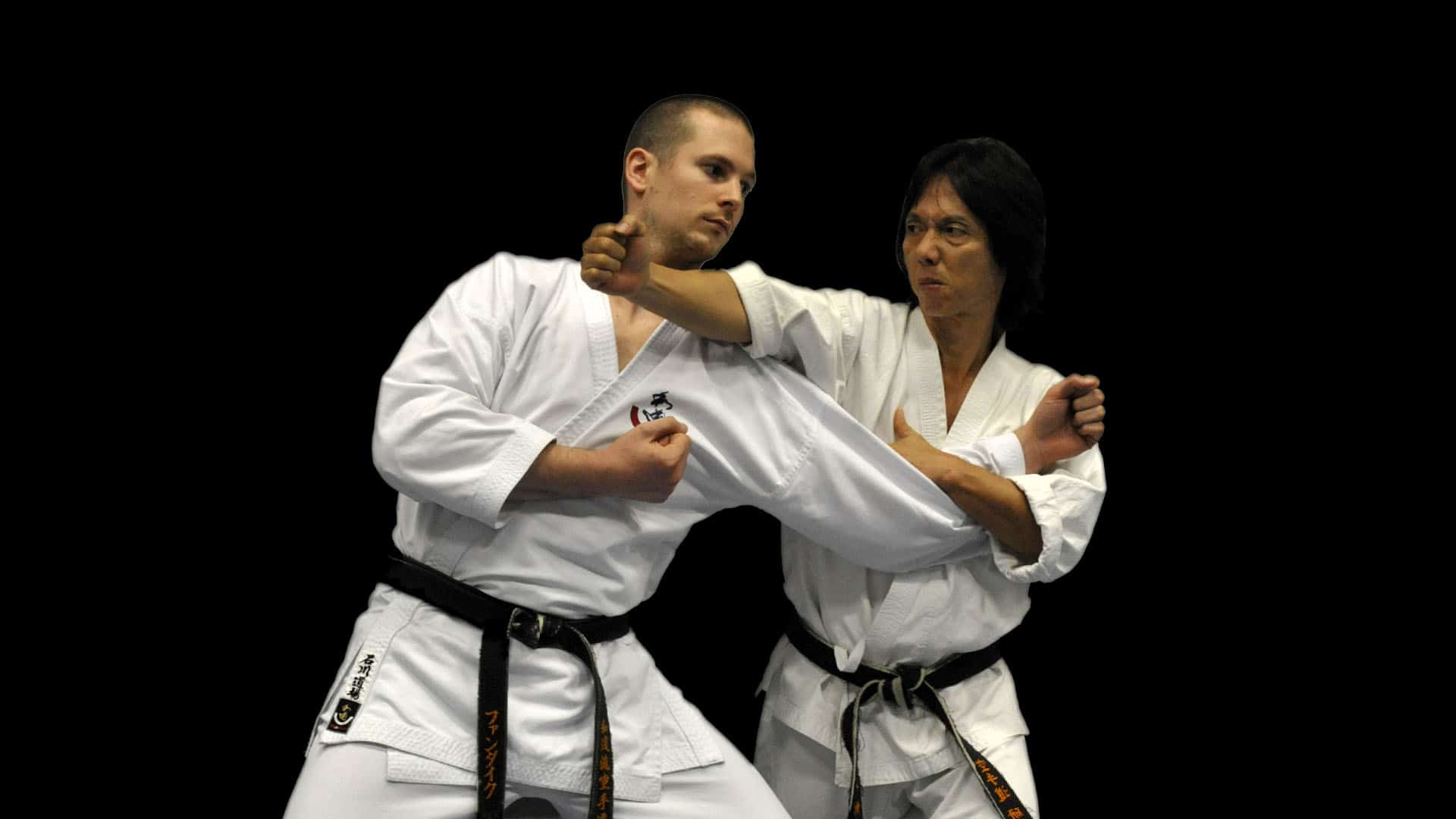 Because if you don't, you won't get it:

Terminology can put you in the right direction, but Budo is specific. Like a field you work in, with jargon (so even Japanese won't understand it's technical meaning).

Sometimes words are cloudy and almost poetic in their description. Like Unga Dori meaning "Shadow of the cloud".

For Hikite it's the other way around.

It's easy to translate, but straight away limits your understanding because it only points in one direction.

Before we decipher "Hikite" — watch this:

In summer 2015, I was in Japan. I discovered the true meaning of Nagasu on the toilet 👇 Of course I am not serious with this example, but it shows that the meaning behind a word can be quite different in daily life as opposed to using it professionally.

The same goes for Hikite.

Hikite does not only describe the pulling of the hand and the end position, but also the function. And on a deeper level: how to use your body internally — with Meotode.

There are many ways to use Hikite for Meotode. But for now, let's stick a bit more to the surface and get things cleared up.

In Karate, Hikite shows itself in these 3 ways:

1/3 Pulling Back Your Fist From Kamae

Extend your arm. Now bring back your fist from the stretched position to the end position at the side of the chest — this is one of the Hikite.

The name of the action is Hikite, which takes place between picture 1 and 2. This is the first and most common of the 3 Hikite that:

He can't get away, and you can pull him onto your attack.

On a fundamental level?

Both program your body to become Meotode — getting your body to move effectively. Your left and right side moving in sync.

Hikite "2" is the end position. There's always discussion about "the correct height" — so let's get that out of the way next.

get the online course "mastering meotode" 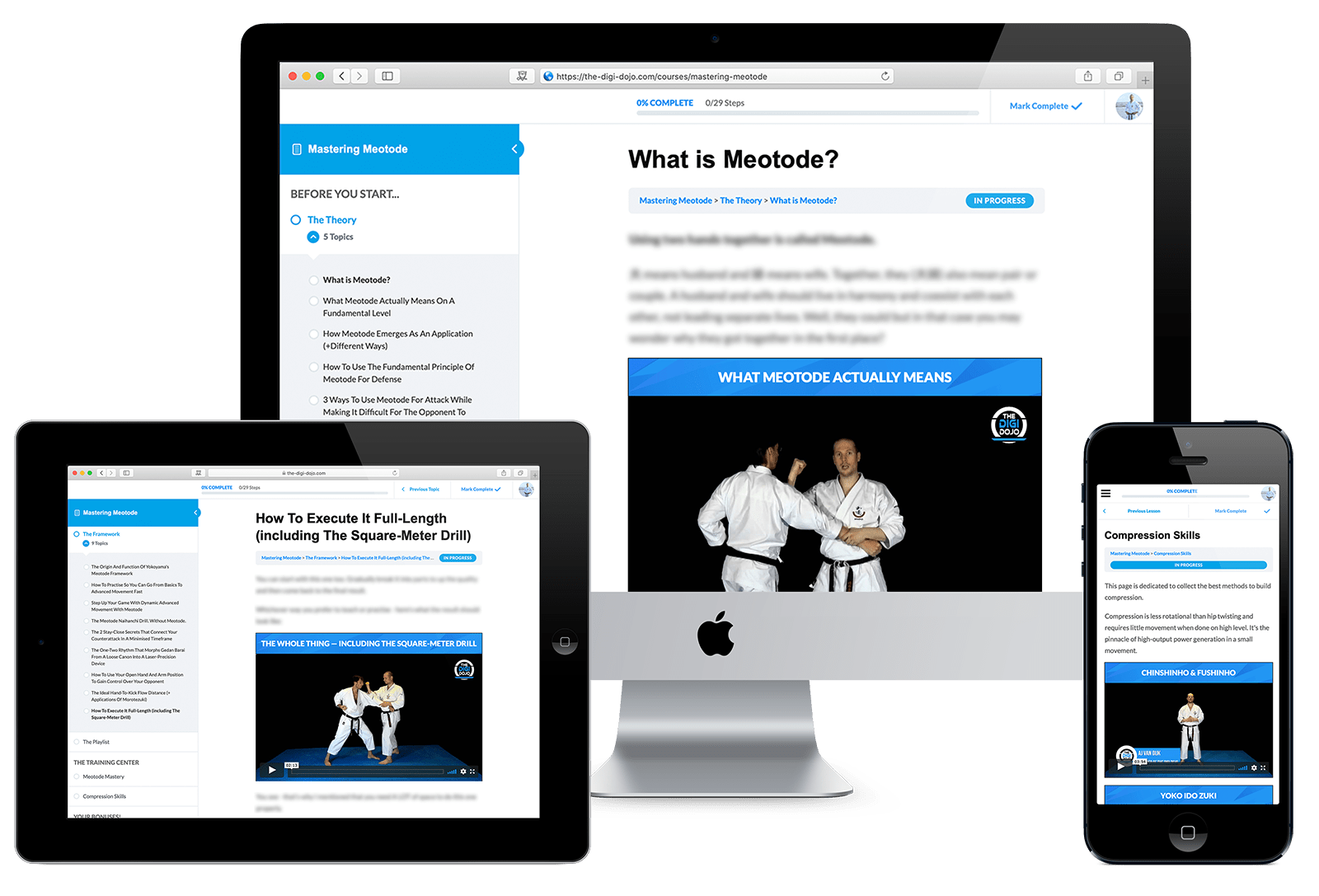 Get The Framework as designed by Kazumasa Yokoyama to kickstart your Meotode — and take it to the next level. Trapping and Compression skills included.

2/3 Position At The Side Of The Chest

The end position at the side of the chest is Hikite too. Although there are many possible positions if you check inch by inch, you could categorise the end positions of Hikite in 3 heights.

What Is The Correct Height Of Hikite?

In this video, I explain the three different heights of Hikite and share Hironori Ohtsuka sensei's answer  to this question.

3/3 Pulling Back A Strike Or Punch

In JKF-Wadokai's Ido Kihon (the official basics) you punch and extend your arm. It's only when progressing to Tobikomizuki and Tobikomi-Nagashizuki that you pull your fist back to Kamae.

This is the 3rd Hikite  — pulling the fist of the punching hand.

For beginners and competition type of fighting, this Hikite is well known for its big, visible movement — especially for Tsuki.

For Uraken, there is also Hikite.

3 Reasons Why To Execute Hikite For Uraken This way

You discover 2 ways of doing Hikite for Uraken in tis video. There are 3 reasons why you should pick one over the other — clearly. 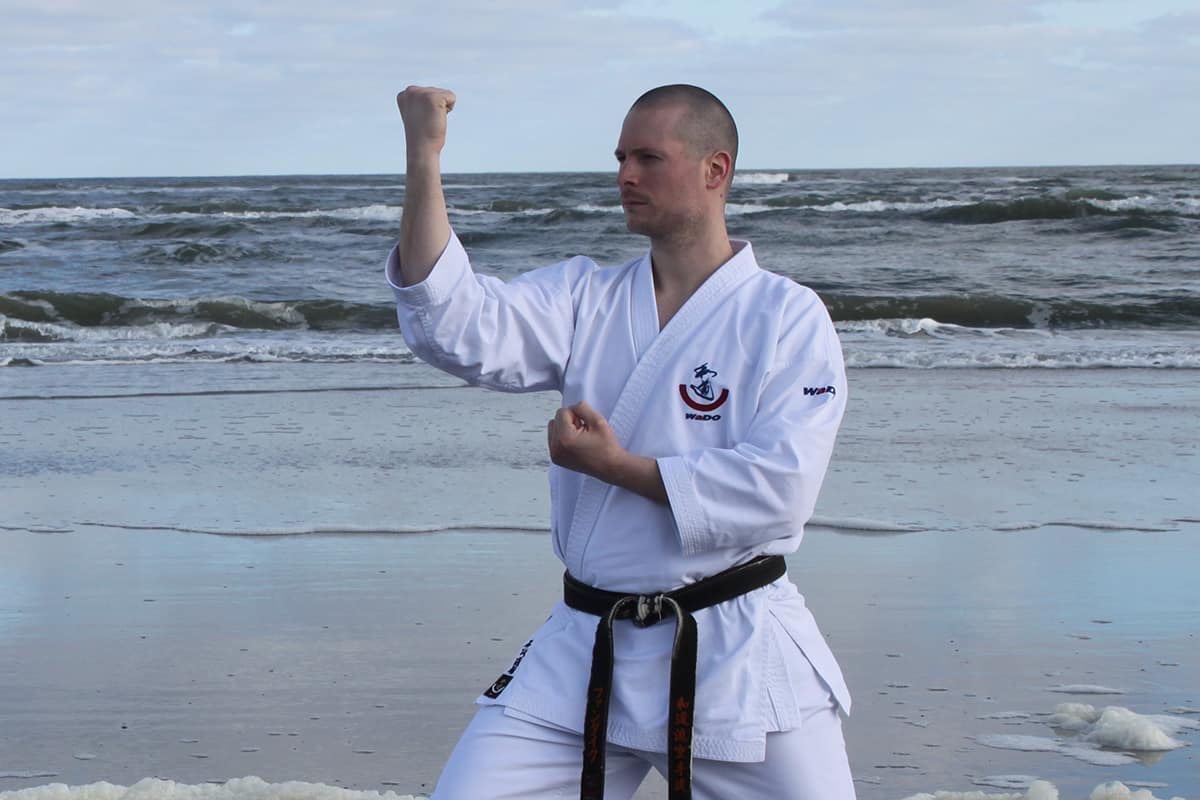 Some terminology points you in the direction of in-depth knowledge. Other terms send you off track.

Hikite is a bit of both.

In a bad way, you think about hand movement. The good way is pointing to basic Sonobazuki with a classic Hikite approach. It's the gateway to Meotode and quality movement with internal muscle.

If you want to dig deeper, check "Mastering Meotode". 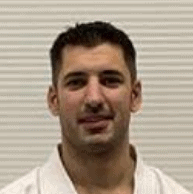 The Aston Martin of Karate teaching.....

I really enjoyed AJ and Sakagami sensei's seminar by receiving quality instruction balanced with patients and belief. At no time I felt criticised. In fact, I always felt confident that every element was improving my standards as a student of Wado. There was so much content to take away from the seminar, especially because their words hit home fast encouraging progression, confidence and self belief.