Ohyo Kumite is a series practised in Wado Ryu Karate by many Dojo all over the world.

Suzuki Sensei created this series to bridge the gap between the static formal techniques and free fighting.

That's why often you find the mistranslation: "Semi-Free Fighting".

Here's the Kanji of Ohyo 応用 and their meaning (we'll get into the technical stuff in a sec.)

Together 応用 translates into application or practical use. You can see how "Semi-Free Fighting" would serve as a translation. 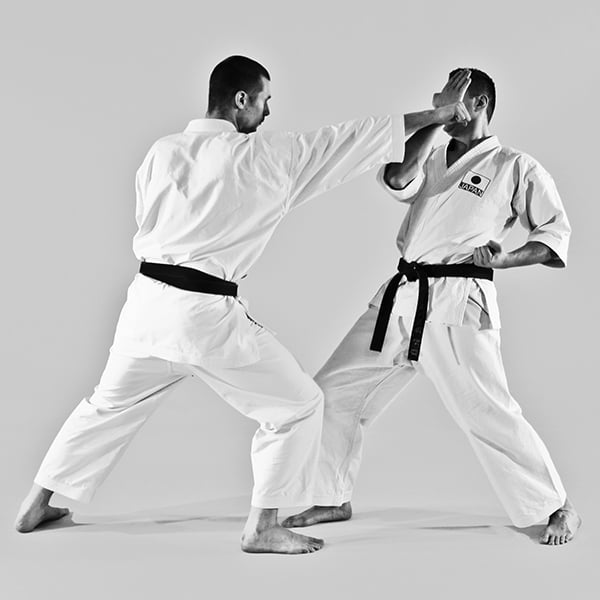 - The first attack from Ohyo Kumite 1

With the "bridge the gap" in mind, let's move on to how people practise.

Over the years many Dojo adopted the series, but senior instructors also used the template to add their own ideas.

And that begs the question....

Did they "change" Ohyo Kumite?

Yes and no. They changed Mr. Suzuki's Ohyo Kumite...

If you understand the series on a deeper level you realise it's a concept and template. And from there it's easy to see how experienced instructors can use it to practise the techniques they favor. And make it suit their way of thinking.

Take this part from #4 for example:

Ishikawa sensei taught me to grab behind the neck (not the Karategi) for more control. It's also an application of Ratai Dori (naked techniques). 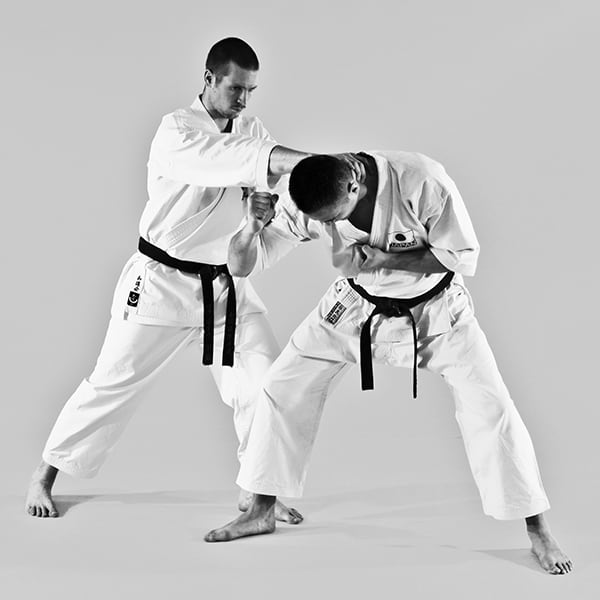 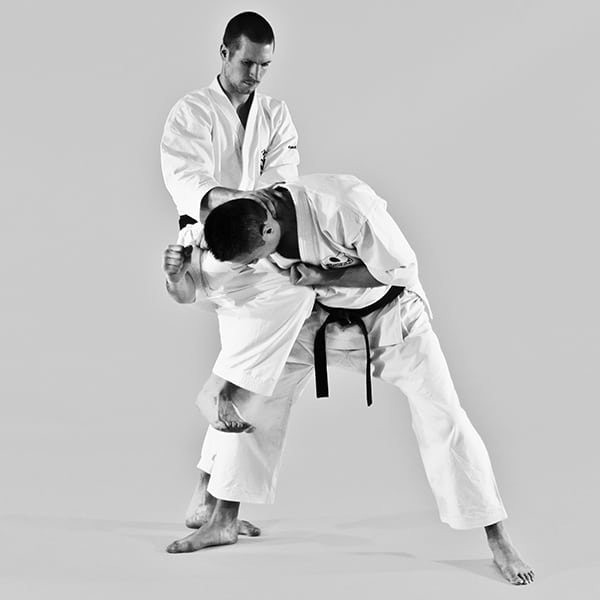 Credit to Mr. Suzuki for laying the groundwork of such an exceptional series. And at the same time it's key to realise what he did was HIS Ohyo.

For example, have you seen Kono sensei in action? You can see his Ohyo are like Suzuki's but clearly he "changed" them to suit his Karate.

So where am I going with this?

EVERY type of Kumite has a SPECIFIC purpose which requires an approach focusing specifically on just that.

And that's the big paradox-like problem of Ohyo Kumite:

Learning it as a form is only the first stage... but that's where most people get stuck.

Now you have a better understanding of the necessary mindset, let's move on to the technical stuff (that you probably came for). 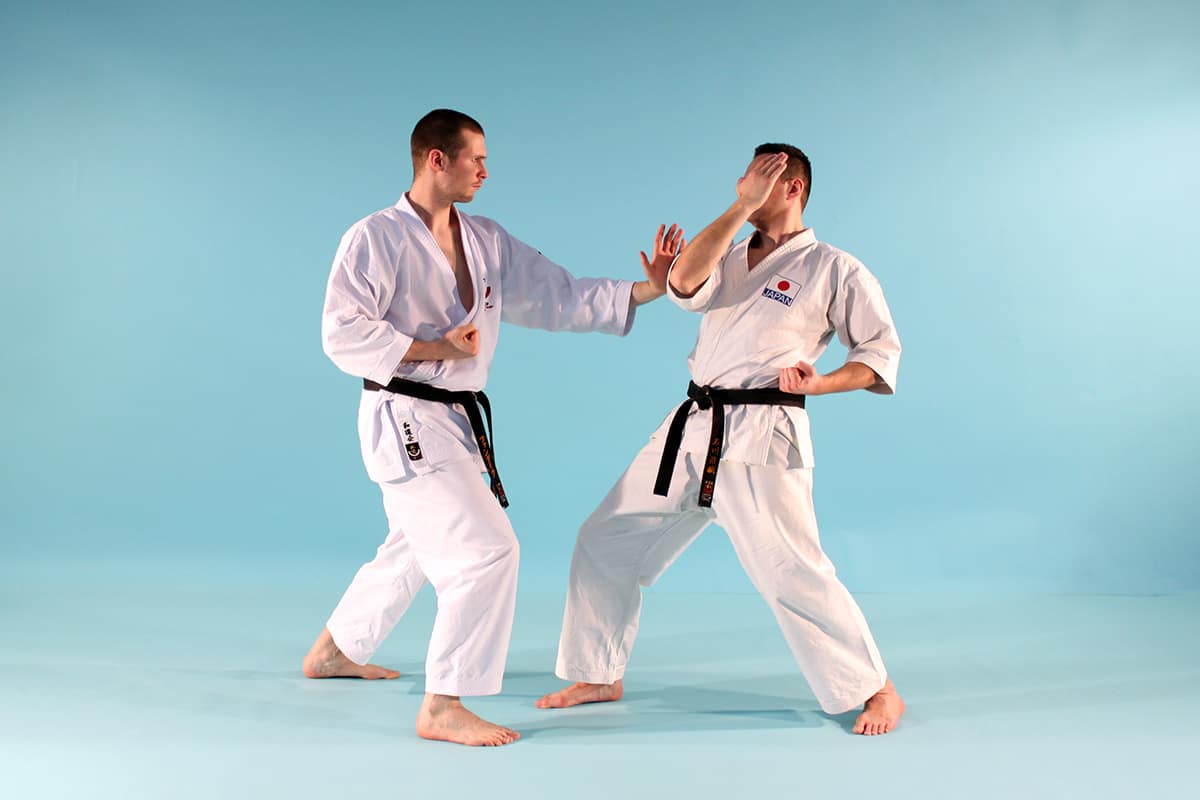 ohyo kumite 1 — from wado no michi 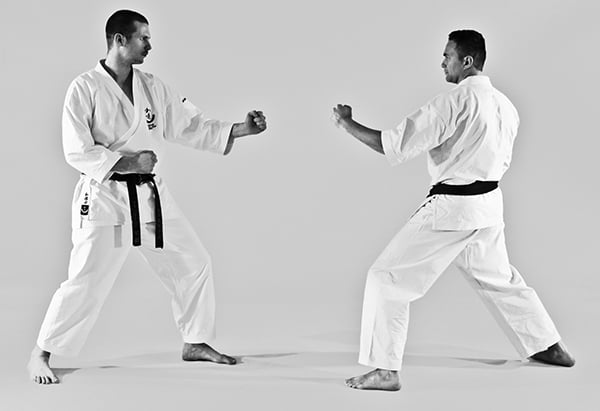 Get ready to enter FAST. Use your left hand to control right from the start.

—
From musubi dachi, open the stance into shizentai or engage into kamae immediately. It does not really matter what stance to use before moving into kamae, as long as the stance of both Torimi and Ukemi is the same.In this case, it is hidari ai gamae. Torimi moves forward and Ukemi moves backward.

Step in deeply. Try for force him shifting weight to his back leg.

—
Torimi moves forward to execute jodanzuki. The posture should be a little tsukkomi. Ukemi responds to this attack by doing an ayumi ashi and eventually executes shuto nagashi uke. Ukemi should tilt the upper body backwards due to pressure created by Torimi. Actually, try to force Ukemi to suffer itsuki in the left leg. This pressure is there from the initial of engaging into kamae. From that point, your body should not move back or increase maai in any way. Of course, move forward by pulling the whole body as you do hiza no nuki to facilitate this action. Maintain a matter of calmness inside the body as you travel as quick as possible. As you move forward, protect seichusen with the left kamae. Not by extending the arm, but by entering with the body. Keep in mind that the intent should be to attack, but also that you should be ready to adapt and react to any sudden change. Of course this is a kind of yakusoku gumite so both should follow the form. However, in ohyo gumite you are allowed (this is also agreed upon) and expected (for higher grades) to experiment with other techniques. 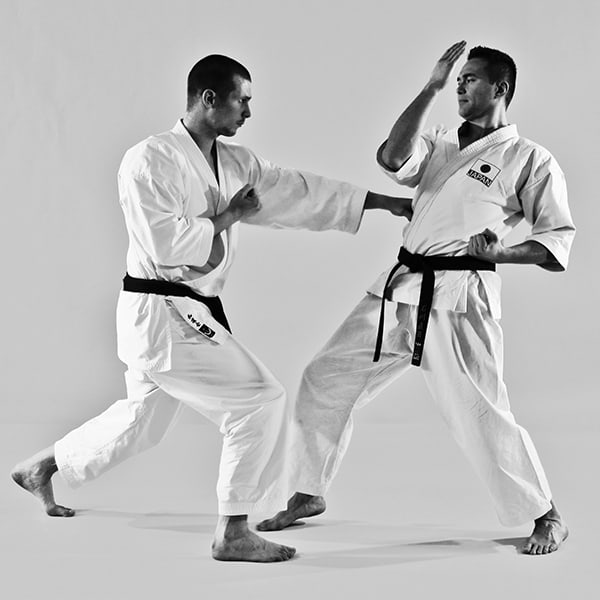 Use Tsugi Ashi Gyakuzuki to get close to the opponent. Punch in succession to keep the opponent occupied.

—
Continuously, move forward using tsugi ashi and execute chudan gyakuzuki. Your centre should keep moving forward, in order to reach the opponent when executing chudan gyakuzuki. You have to correct the distance after jodanzuki. Ukemi will most likely respond to your attack in some way, so maintain the dynamic in your movement to follow the opponent and to change your movement if necessary. What is most important in this technique is that you can attack different levels (jodan and chudan) without interruption. Hence, you need to control your own body as well as continuously trying to control maai. You have to think about attack the whole time, while not forgetting about protecting your body. Protecting meaning the same as protect to attack. Not protect to withdraw. Similar to avoid to attack and not escape to run away. If the opponent attacks with left jodanzuki for example, drop the body and strike him in the groin with your right hand.

THIS PAGE IS PART OF THE ONLINE COURSE:

"The Journey To Henka Waza" 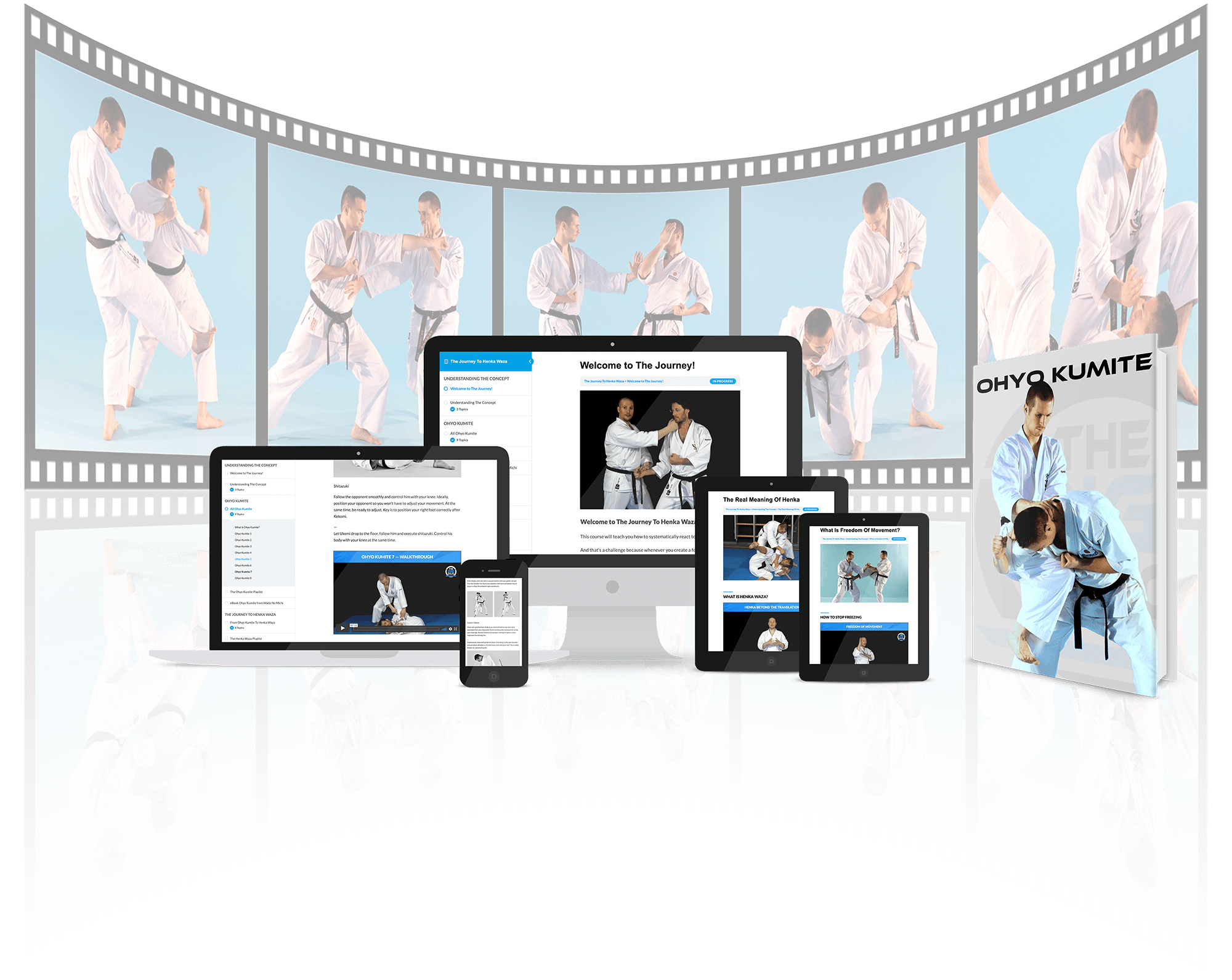 The Journey To Henka Waza is your ticket to moving freely. Through in-depth analysis of the concept of "Henka" you'll forge the mindset and skill you need to adapt instantly.

The course includes coverage of all Ohyo Kumite and never-revealed-before Henka Waza.

Discover The Journey To Henka Waza 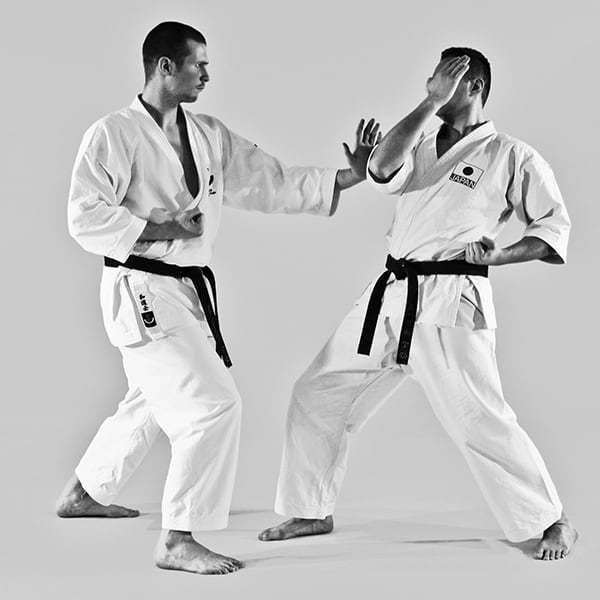 Immediately control his Kamae without pulling your fist back. Let your fist 'bounce' into place with Nukeru.

—
After executing gyakuzuki, drop your power instantly and cover Ukemi’s kamae with your left hand while correcting the distance for ashi barai with your right foot. Make sure not to pull the body away from Ukemi, keep applying pressure forward and stay close to Ukemi. If you increase the distance too much you are allowing Ukemi too much freedom to move. Of course, there is always some freedom unless you are tied to a chair. However, you have to give Ukemi the feeling that he is tied to a chair. You should own the maai. Imagine Ukemi attempts to do uraken, then you control him with your left hand for example and still continue with ashi barai. Or, control and push (or take hold) with your left hand and execute chudanzuki with the right fist possibly followed by kingeri with the right foot. There are always almost endless variations that you can think of, but keep in mind that Ukemi has this ability as well. Of course, in jiyu gumite Ukemi tries to control the maai as well and in his mind he is Torimi. 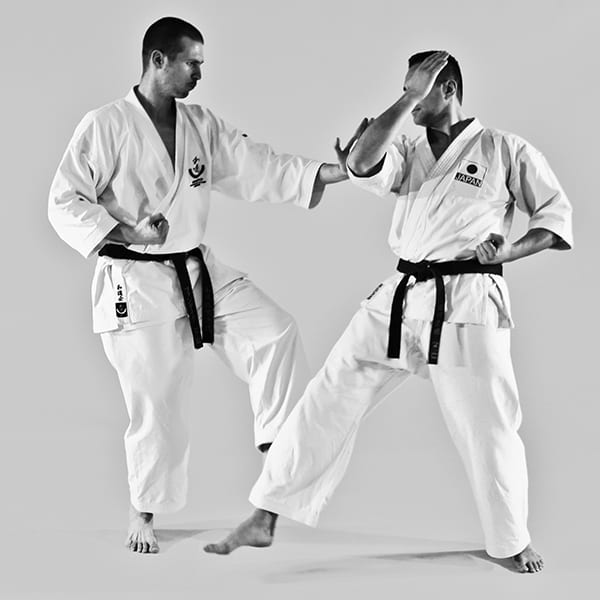 Make sure to sweep as low as possible, close to the ankle. And use the right angle, else it won't work if your opponent has weight on his foot and doesn't help you.

—
Continuously, while guarding seichusen and controlling the opponent, execute ashi barai. Create Ichi Go Ichi E and destroy Ukemi’s posture. When training Ukemi often thinks ahead if he knows what is going to happen and adjusts his movement. Avoid those situations as that is a counterproductive action. Although you should aim to destroy Ukemi’s balance and position him in order to deliver a strong punch, Ukemi might respond in another way than expected. Of course there are some body mechanics (and laws of nature) that are the way they are, but when somebody is scared or makes a sudden move, things might turn out differently than expected. Hence, in this situation you have to be ready to punch or kick. To try another kind of ashi barai or do anything that puts you in charge and not the opponent. In my opinion, these forms are not really necessary to practice, but the concept is. To allow your body to freely adapt, you have to practice. This will give you the experience you need. 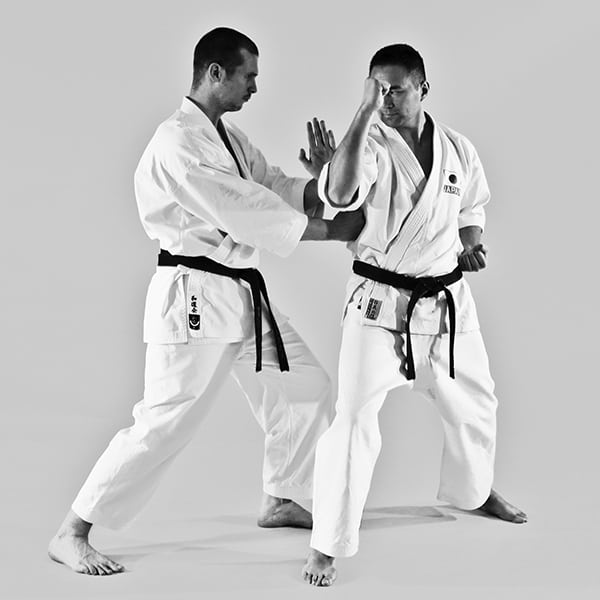 Cover the hand with minimum tension. Naturally you may lose some pressure when you punch. Still try to keep the left arm in place properly WITHOUT pushing excessively.

—
Continuously, use the momentum of lowering ashi barai and execute gyakuzuki. This will probably become tateken due to the distance. Make sure to strike the lower ribs. If Ukemi turned to far to strike the ribs, practise to position him better. However, at that time execute haito uchi or mawashi hizageri if appropriate. Remember that ohyo gumite is a dynamic practice. Finally, push Ukemi away with your left hand to make him turn around becoming left hanmi. You should move back into right hanmi, so you can continuously practice nihonme. All ohyo gumite can be practiced continuously in this way. 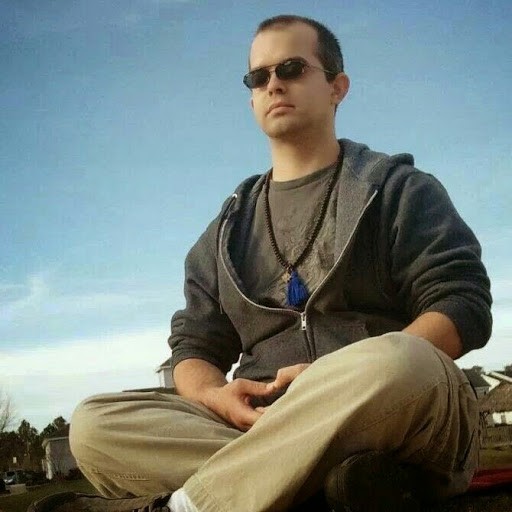 Great course for mastering the basics!

Mastering Shiyobui is the first video series that has taught new ways to apply the basics. Having a good foundation in the basics of karate is essential, and this series definitely provides that necessary foundation.