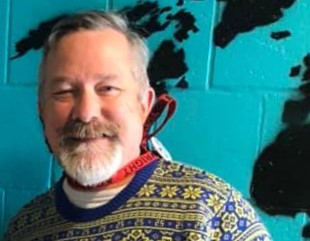 The Square-Meter Method Videos help the reader to avoid any confusion with the direction of the techniques and the author is very crisp in his movements and does them perfectly. This would not only be a great supplement for those who train alone, but for a lesson on using technique in crowded spaces. Techniques are only useful if we can make them work in all situations and surroundings.

what is wado ryu kumite gata?

...so you really can't get a better glimpse of Ohtsuka sensei's brain AKA The Core Of Wado.

And as Peter May sensei said: "These are the jewels of our system". 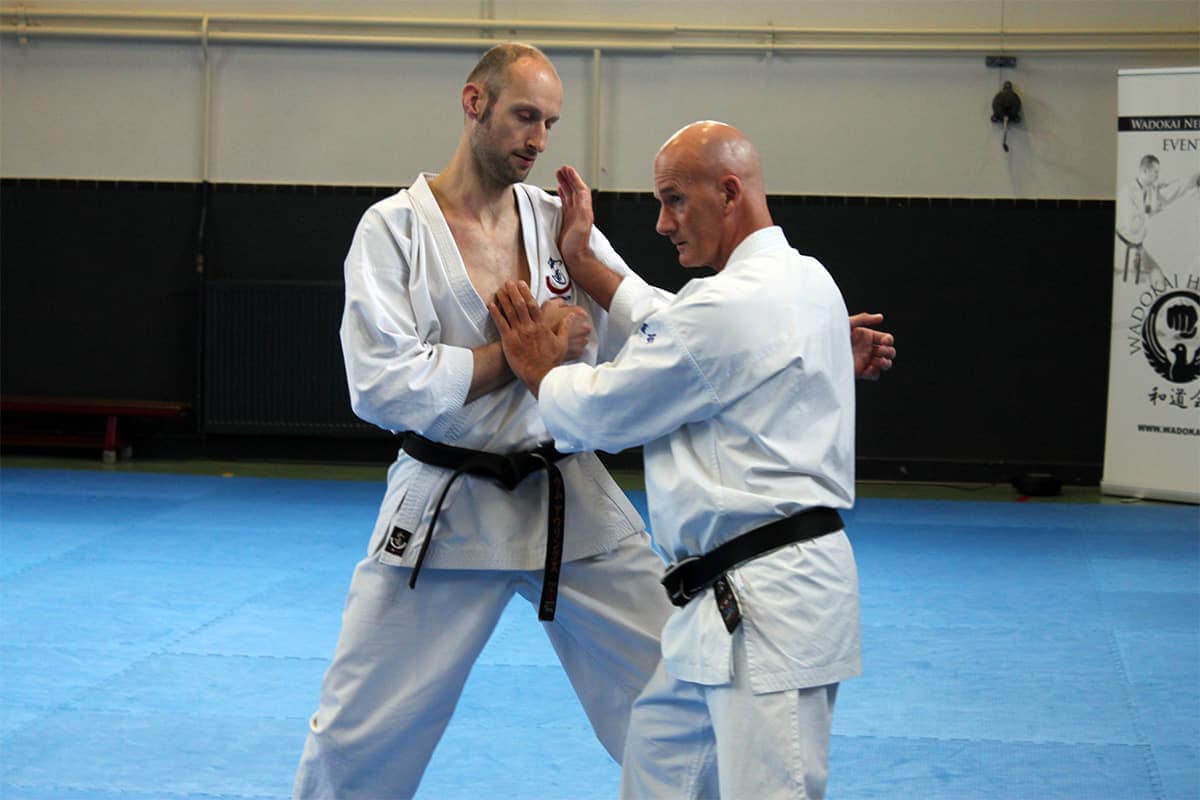 These jewels go by others names too:

Ishikawa sensei new lots of "Ura waza". The downside was that he did not structure them...

Sakagami sensei uses numbers for Kumite gata within  Aiwakai. This makes them easier to learn, and remember.

Eventually, it's the technique and execution that matters (but it does help to memorise)

Before we move on to the techniques though, let's study the matrix first:

the original matrix of kumite gata

Kumite gata are originally a series of 36 techniques.

Shall we go ahead to check each element, one at a time?

First, there is your starting position. Do you take left or right stance?

And what about your opponent?

Depending on your stance and your opponent's stance, you end up in... 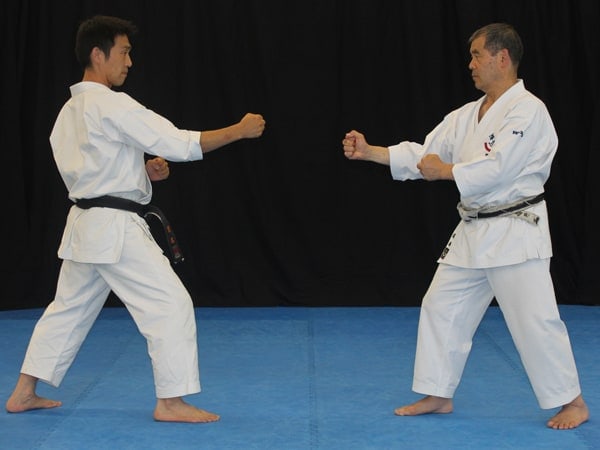 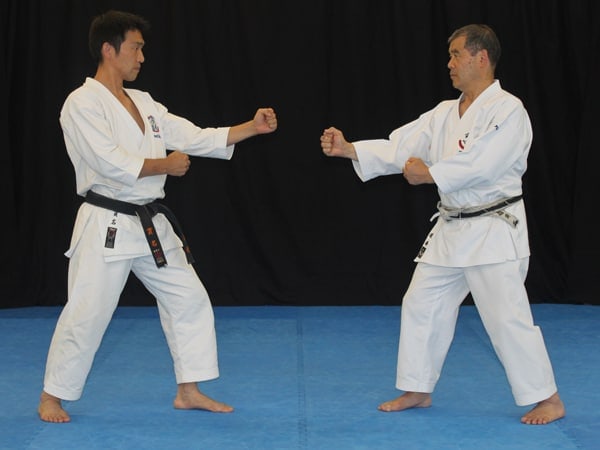 Is your opponent attacking your legs?

So: Is the attack Gedan, Chudan or Jodan? 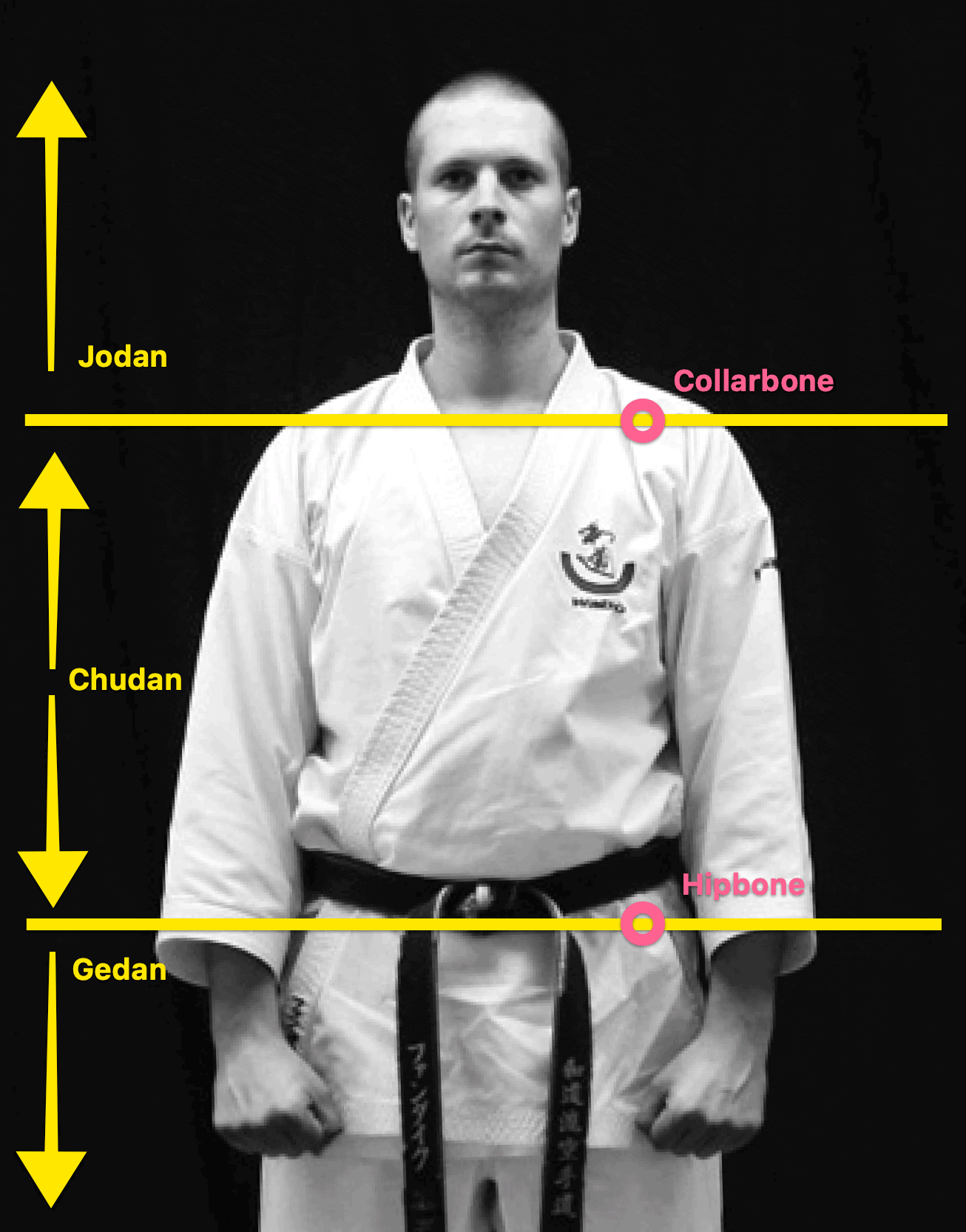 Will you move to the inside or outside of the opponent? 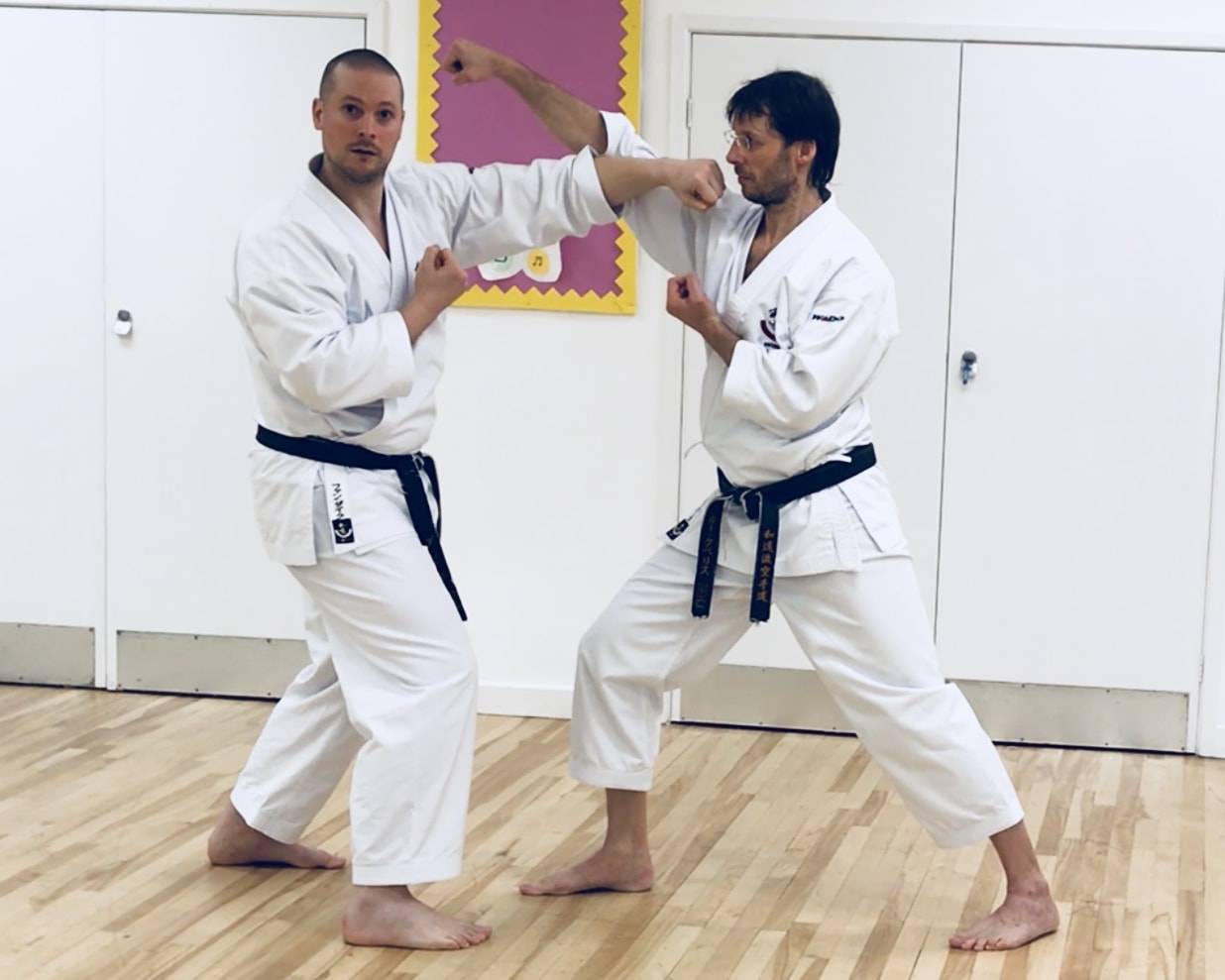 - Uchi Zeme, on the inside 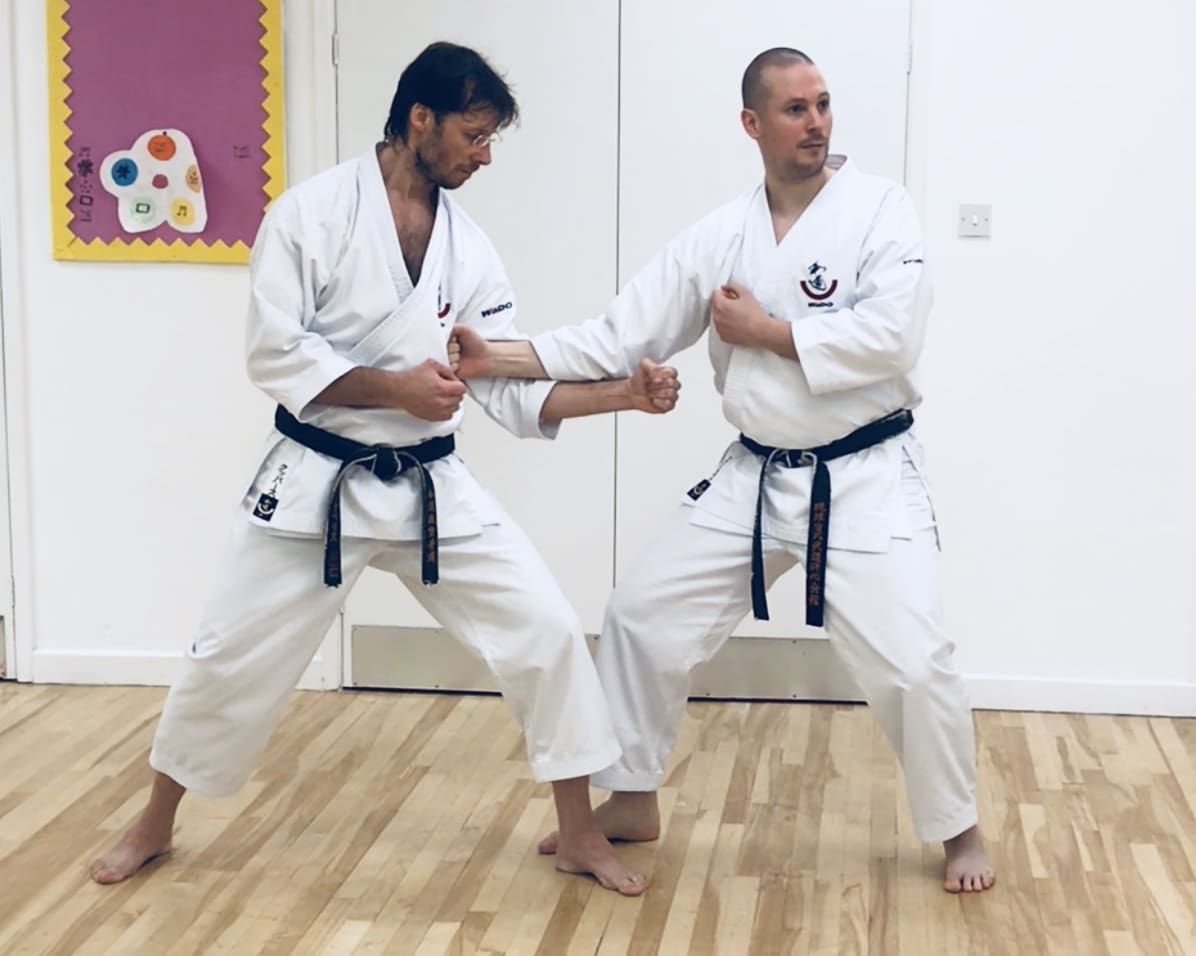 - Soto Zeme, on the outside

Practically you may not have a choice, but on paper this means 2 extra options. 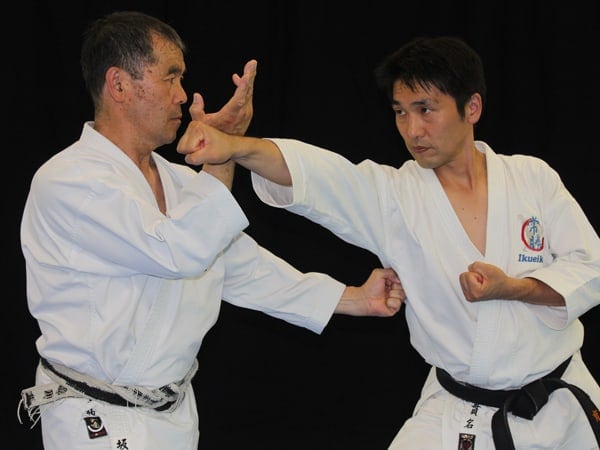 Finally, there's timing (and this will get you to 36).

You've got to admit, this is an amazing matrix!

So that begs the question...

Why didn't Ohtsuka sensei emphasise the full 36 to his best students and senior instructors?

Without making too many assumptions as I wasn't there...

Ohtsuka sensei taught at an international seminar saying "This is number 24". Then Mr. Jiro Ohtsuka wispered to him something along the lines of "Dad, we're not teaching those anymore".

Anyway — main thing is this:

So what starts out with an AIR-TIGHT structure, practically means loads of overlap.

And Wado is principle based after all...

Still, Ohtsuka sensei can be seen demonstrating these techniques. And he taught Ura Waza to several Japanese instructors. One of them being Sakagami Sensei.

So even if the 36 in full were discarded as a system...

so... is kumite gata that different from kihon kumite?

Even if you do not have the capacity to explain by word — you can FEEL the difference when you practise. And the difference between Kihon Kumite and Kumite Gata is HUGE.

The 2 biggest differences are...

1 — In contrast to kihon kumite, you deal with Ukemi's attack by counter attacking right away.

In Kihon Kumite you counter in the second, or even the third movement. 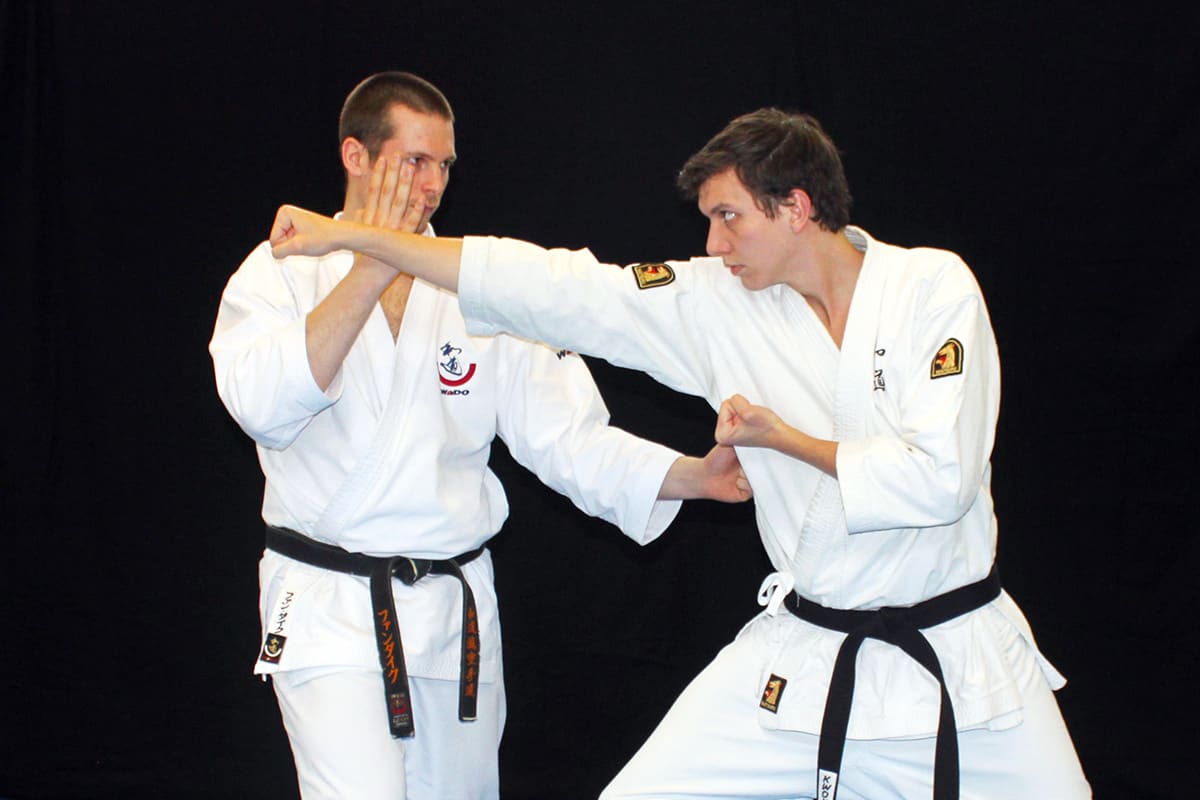 The conclusion is simple:

Kumite Gata are series of techniques that have more focus on overcoming and controlling the opponent.

The techniques are more towards application as opposed to Kihon Kumite.

Of course, Kihon Kumite nor Kumite Gata are ready-to-use techniques, but clearly there is a different emphasis.

2 — Kihon kumite teaches you how to control your own body. kumite gata teaches the opposite.

It has less emphasis on controlling your own body, because you already learned this in Kihon Kumite.

Instead, you learn how to use your body to control your opponent. 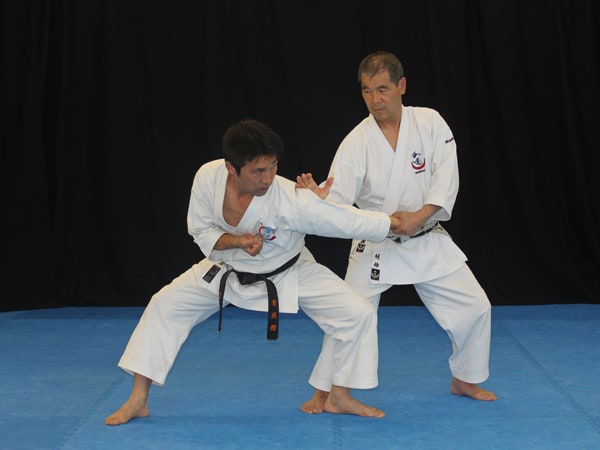 Movement is more sophisticated in KG because it includes:

Simply check the videos to compare #1 to see what I am talking about.

This is the one. The most important one from the series.

Like Kihon Kumite 1, it's the most fundamental one of the series. It doesn't necessarily contain all techniques or principles on the surface, but the message is clear. This is how Kumite Gata works. 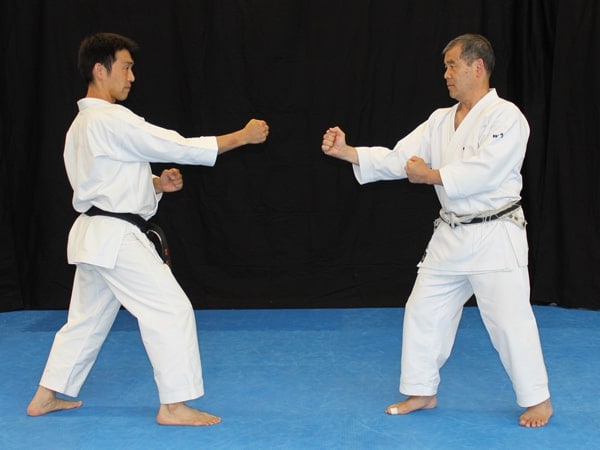 Hanmi, literally half body, which means that your hip has to point diagonally to the side (say 45 degrees).

Chudan refers to the middle section of your body. This is the part of the body between your hipbone and the base of your collar bone.

Kamae means posture. Formally you should write chudan gamae, because Chudan preceeds Kamae. This has to do with rules of grammer and pronounciation. 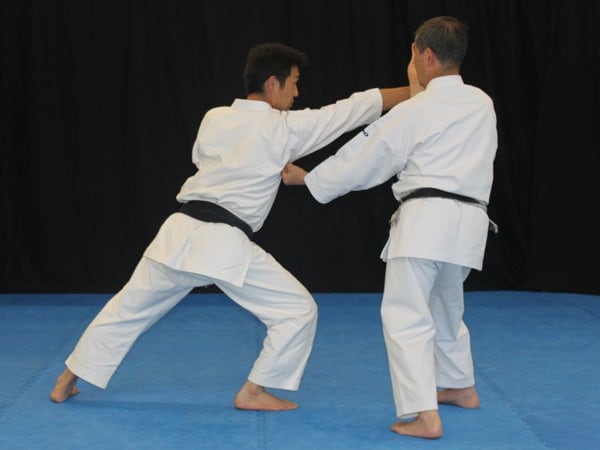 Ukemi attacks with Tobikomizuki. You defend with Nagashi Uke and attack using Nakadaka Ipponken at the same time.

Do this, while moving left and twisting to the right (Taisabaki details at Henka Waza).

This movement is equal to the second movement of Kihon Kumite #1, with the exception of jodan uke instead of chudan uke

Pull your right shoulder a little more (or at least that feeling) compared to chudan uke. Connect the three movements and let them use each other positively.

THIS PAGE IS PART OF THE ONLINE COURSE: 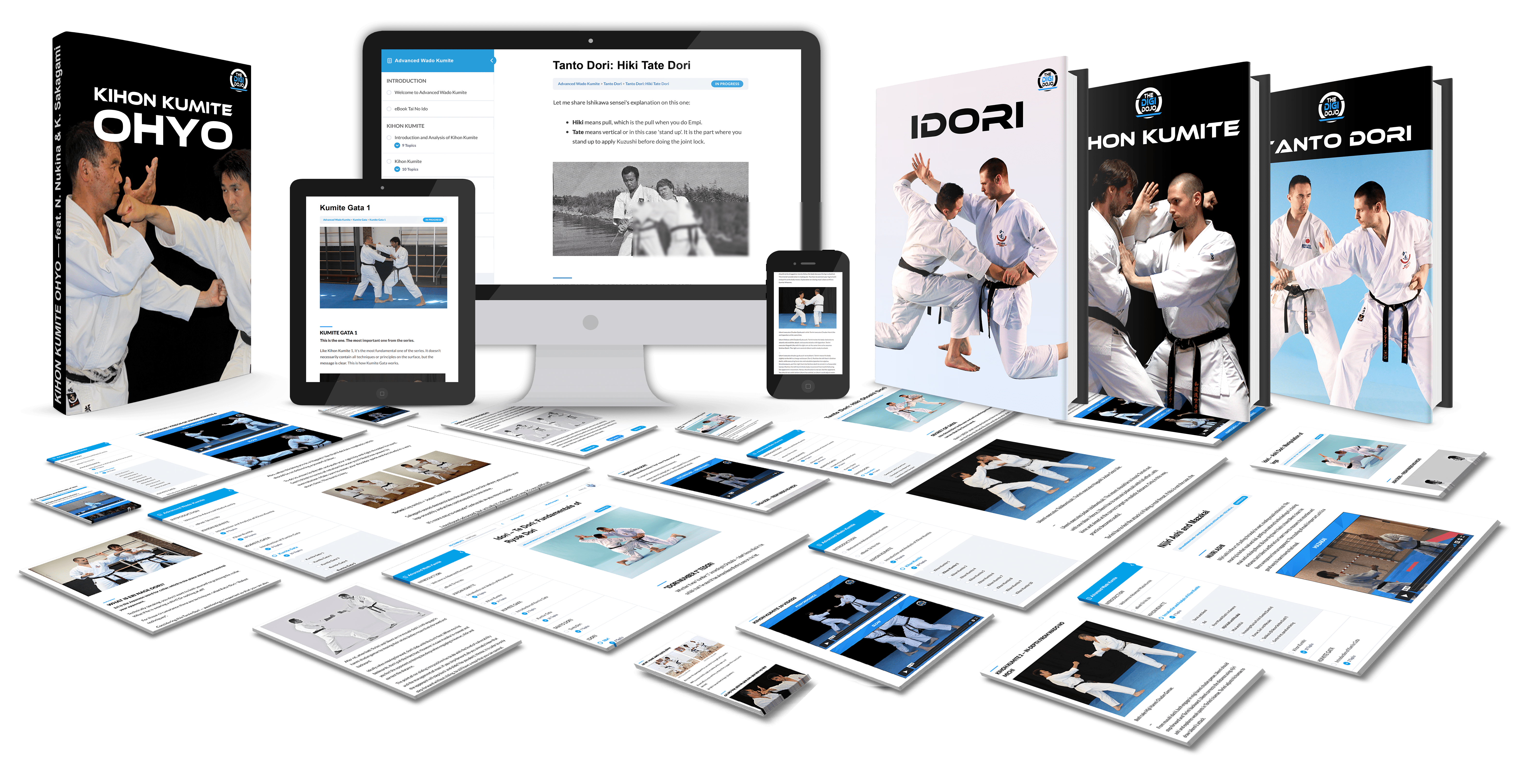 Advanced Wado Kumite covers Kihon Kumite, Kumite Gata, Tanto Dori and Idori completely. With details only a few top instructors know so you can make your skill look effortless too while being highly effective. 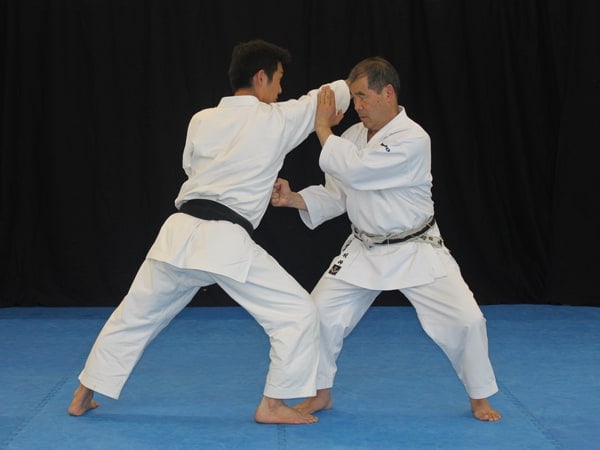 Follow up with another Nakadaka Ipponken, and control him behind his elbow.

The second punch for example. Make it powerful and sharp using your shoulder (prepare it during the first movement).

Deliver the second punch before Ukemi can recover from the first punch. At the same time, jam the front leg to prevent a kick with the front leg (or at least make that more difficult to do).

Note that your right leg and left leg must move with the body. Rougly at the same time.

So don't step left-right. Instead, strike as if doing basic Tobikomi-Nagashizuki making your legs follow your body movement. 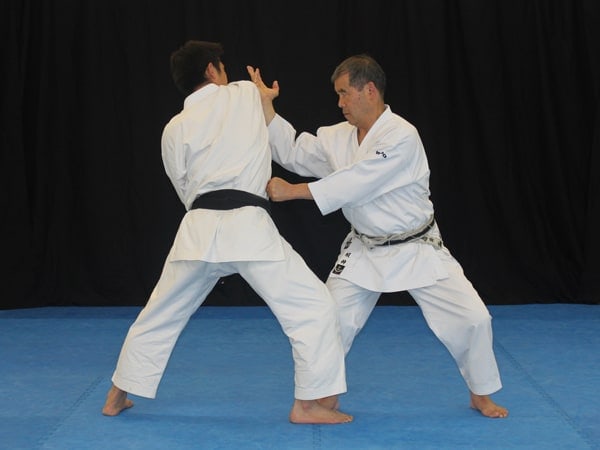 Finally, apply pressure to his right arm for Kuzushi, and strike his body with Nakadaka Ipponken.

The function of this movement is Kuzushi, breaking the posture.

The key to success is to do Kuzushi from your strong line (Seichusen) and attack his weak line.

To match your body movement and have correct timing, do this:

Note that I explained "apply pressure" instead of "push him arm".  Because you should push with your body, not push by extending your arm. Position first, then move.

Next to "Omote Waza", the regular techniques, there is also "Ura" (reverse/hidden) and "Henka" (variation).

And any technique has variations...

Look at the formal series as a template. They're the groundwork layed out for you to work with.

Of course you shouldn't start doing variations just for the fun of it, since you risk huge devation from the principle. Don't practise or introduce Henka Waza too early, but not too late either.

Henka Waza is to study and understand the techniques in more depth.

Take this variation of KG1 for example:

Instead of moving back to the inside, move to the outside of the opponent and pin your opponent. Use your shin to apply Kuzushi and position your body correctly.

Let's compare the lower body movement of the official KG1 and the one you use in this variation.

But before you do...

Instead of looking at the surface, I recommend you to look at the fundamentals such as alignment and positioning.

And if you're in the game a bit longer, watch for nuances caused by length of limbs and individual height for example.

So now that you're prepped, let's study this variation move by move 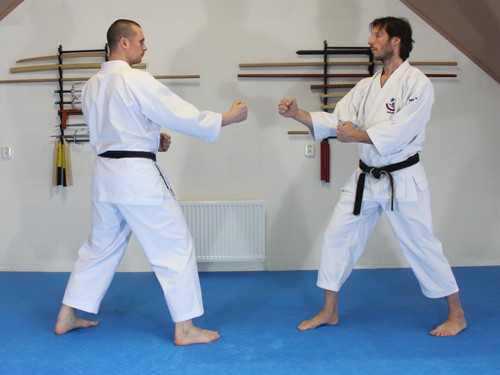 Be sure to move forward, or backward. Even sideways if necessary.

Having Sente (initiative) and Zanshin (awareness) is key (and it prevents you from falling into the pre-arranged trap).

In short: you don't want to be a robot. Don't take stance, close the distance in fixed steps and then attack. 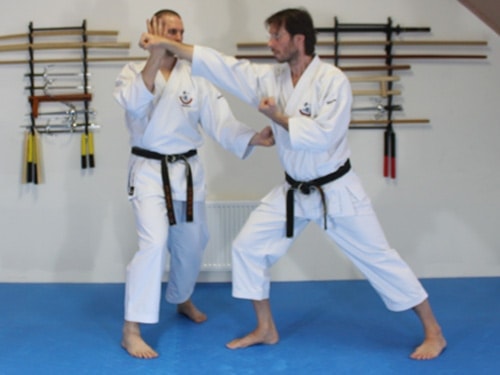 Move to the left and twist your body to the right ending up in Seishan Dachi. In one word:  Taisabaki. 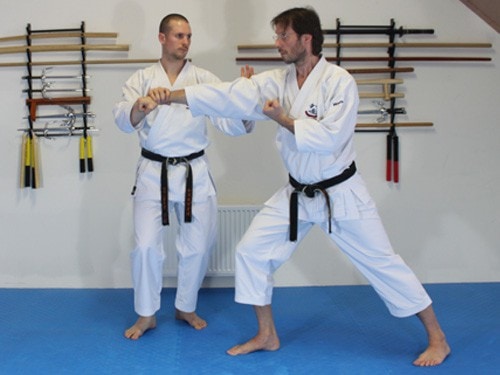 Without stopping, grab Ukemi's wrist and place your left hand behind his elbow.

Do this, by NOT taking stance "in the previous picture".

This Henka Waza should be one flow with a peak of Kime happening when you strike with Ipponken. 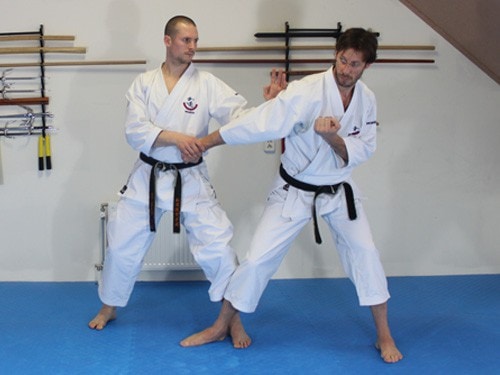 At the same time, control him by twisting his wrist while applying force with your left hand.

And about your left hand...

Place in slightly diagonally below the shoulder. Then move up and down in a round movement - as if going over a hill.

This is similar to Kumite Gata 4

Like this and want more? Discover Advanced Wado Kumite >>