The term Atemi is commonly used in Budo and is written in the following manner:

Atemi is used to describe punches, strikes and kicks that are used to setup the next movement or to disctract the opponent. Another term used is Kariate. This term refers specifically to the result of the attack used. The word Kariate (仮当) is more difficult to unravel as Atemi, since the combination of the Kanji "Kariate" cannot be found in the dictionary. It is a specific Budo word. Kari means temporarily and points to the effect of Kariate (or Atemi) which lasts only a short period of time.

use atemi to setup your attack

If you attack Ukemi you should do so using Ko Bo Ittai. This means, that you should mind defence as you attack. Controlling Seichusen is of course the golden rule, but it is not the only way.

If you setup your final blow, odds are that you will have more chance to strike your opponent. You could for example make an Atemi on the back of Ukemi's hand as you execute Tsugi Ashi Kingeri. the key lies in the timing

The Kingeri attack is one of many. I'll show it in this video together with another one of my favorite attacks.

distract your opponent with atemi to break free

In case Ukemi takes hold of you, you can count on it that another movement will follow. Whatever happens, Ukemi is focussed and will not just let go or loosen up his grip. If you want to break free, you will have to give Ukemi a hand. 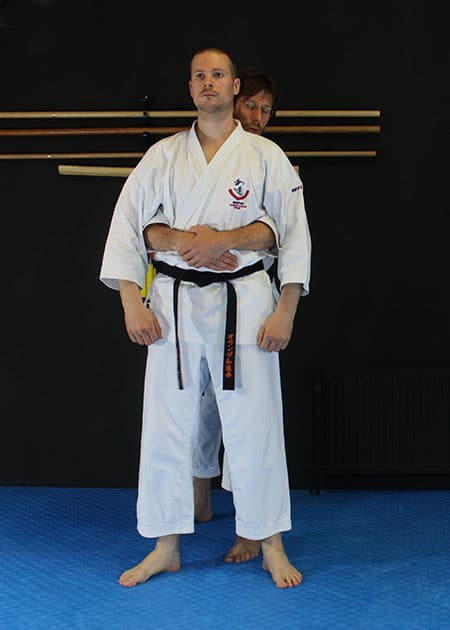 By executing Atemi, Ukemi's attention will shift temporarily loosening up his grip. This is the moment that you can escape and break free. Below you will find an example of how Atemi can be used is someone catches you around your waist.

This attack knows two variations, one is over your arms trapping them too, and the other one is around your waist going underneath your arms. I have chosen the latter to show you the same Atemi in a different kind of situation.