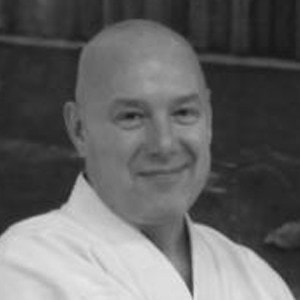 When I saw AJ's new book and videos I straightaway noticed the ease, clarity and effectiveness of the drills. AJ Sensei is a world class instructor. His teachings are always thoughtful and have meaning and purpose. They will increase your understanding of principles and techniques.

How To Execute Mawashigeri Correctly

Mawashigeri is a circular kick, that you don't find in Kata.

Funny right? But whatever the original reason may be, it's CLEARLY an effective kick.

Mawashigeri should come from the side in a dead-straight, horizontal line. On Paper.

Some instructors or styles may emphasise that more than others though... and naturally: if the kick is Gedan or Jodan, the line will be more diagonal.

And practically? It totally depends... 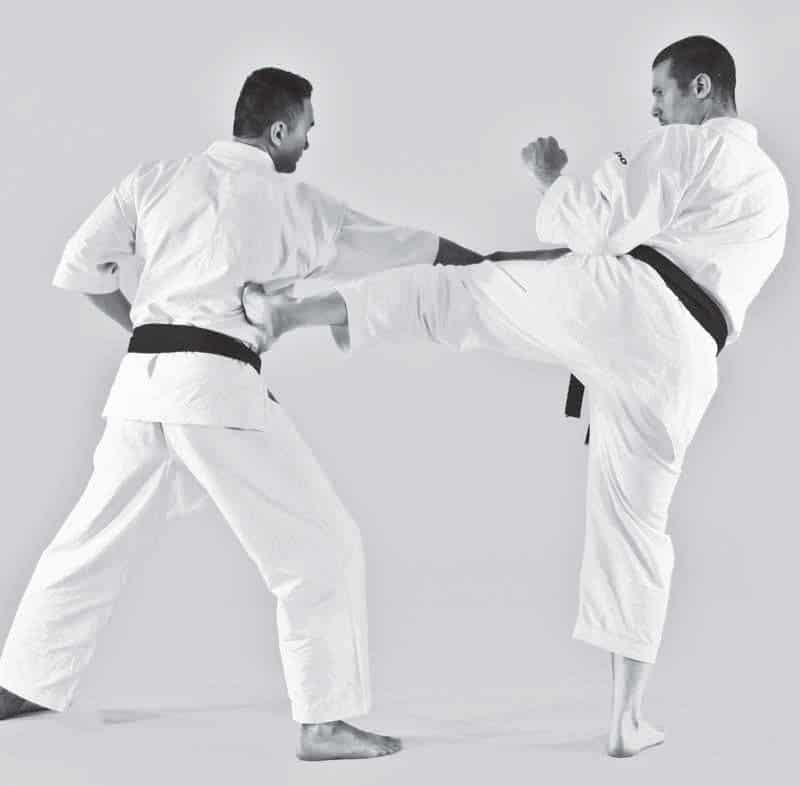 So what does it mean?

...you MUST be able to kick in any angle. In that way, you can use it under many circumstances.

With that said... you need to know what to do physically.

On this page you'll discover: You may use other stances for practise, but this is the general one to start. Raise your knee while keeping your posture as straight as possible.

Start your kick by bringing your knee straight up (Traditional Wado Mawashigeri). You may change kamae naturally, but do not separate the movement.

And did you notice? Kamae is not 'changed'. It's opposite.

Here's why: (3 reasons for kicking like this in basics) Execute Mawashigeri as you pivot on your supporting leg. Keep your left hand in front of your chest, your right hand will tend to naturally position itself.

Note, that you can extend your arm on purpose for coordination. And when you advance in level, focus on "floating" your Kamae (relax as much as possible).

If you do a full Mawashigeri, your foot should point diagonally backwards as pictured.  (When you're very flexible, you may not need to. BUT you'll probably lose ability to use your body to kick.)

Kick With Instep Or The Ball Of The Foot?

Instructors usually teach beginners to use the instep. It's not only easier, but also more popular. The ball of the foot is more traditional, yet more difficult to use.

kick with the instep of your foot With the instep you can attack various parts of the body. You can reach long distanced easily for chudan, jodan and gedan attacks.

Don’t limit yourself to competition rules.

The instep is very useful for kicking the inside or outside of the knee or upper leg. You can even use it to sweep.

To solar plexus or the floating ribs. 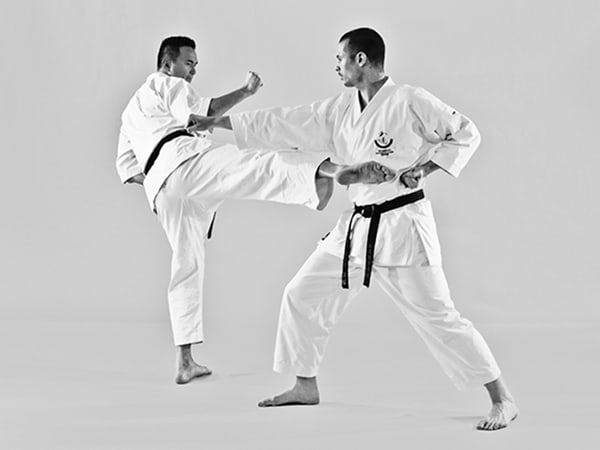 As a low-kick to the leg 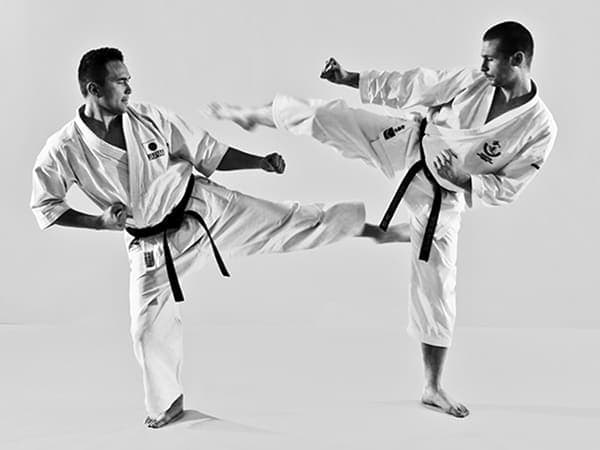 And if you can: Otoshi Mawashi to the side of the neck/collar bone 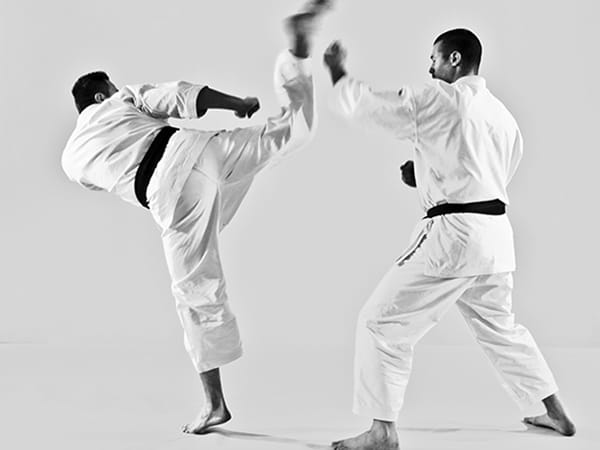 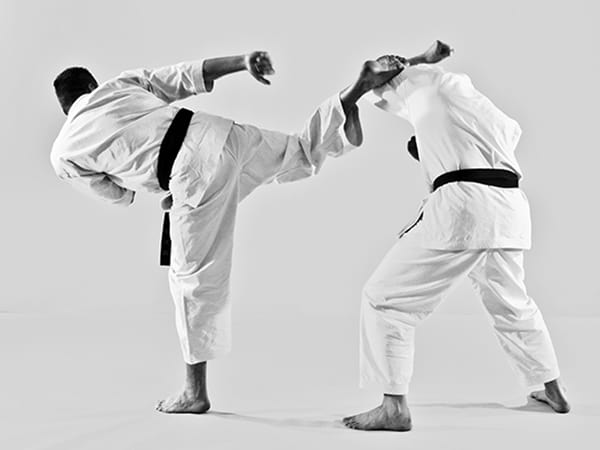 or use the ball of the foot for mawashigeri Use the ball of the foot to attack various parts of the body.

The ball of the foot means focus on small targets such as the ears, jaw and temple. 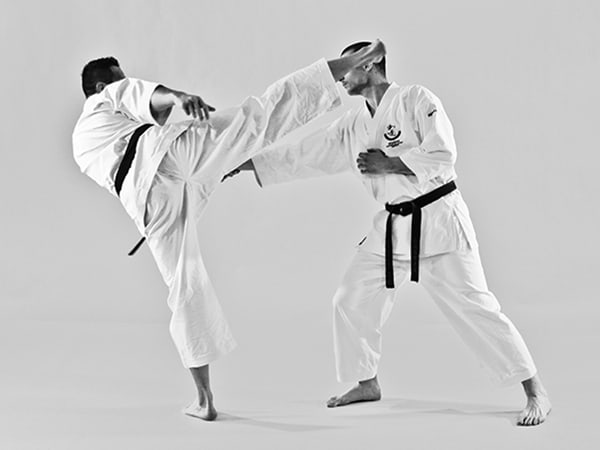 This article and the videos are part of "Mastering Shiyobui", which covers how to turn your hands and feet into weapons, just as you've always imagined when you started Karate.

Just wait until you see the list. Ipponken, Nukite and Hiraken are the normal ones... 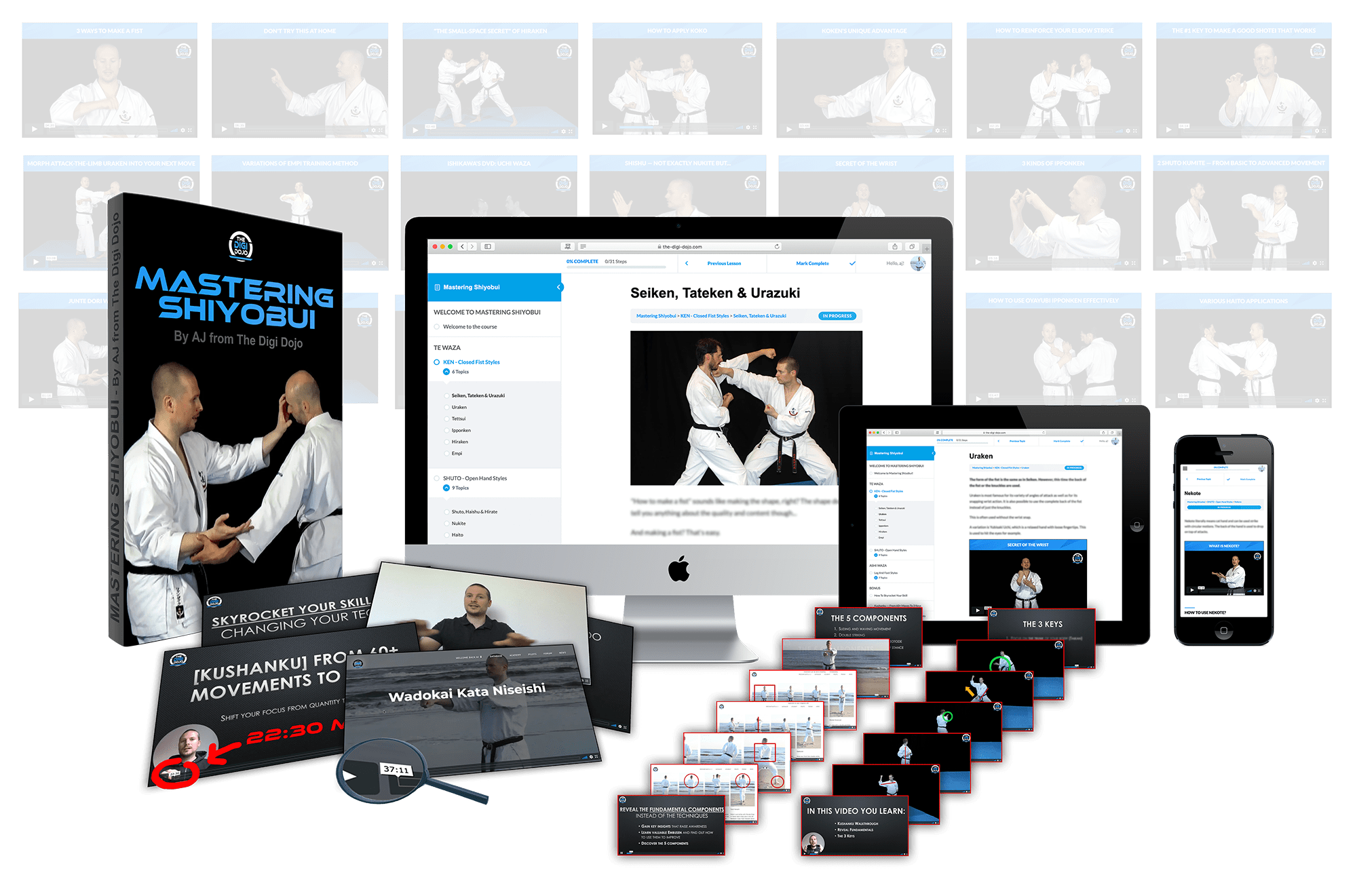 If you analyse Mawashigeri, you can see that it consists of various different elements, which have to work smoothly. In sync. So what do you do, when you struggle with a specific element of the kick?

It's extremely good to isolate movement, so you can focus on that without any kind of distraction. Distraction means other elements that require your attention like balance, twisting, foot pivoting... etcetera.

The extension of the leg for example, is obviously one of the elements.

Here's how you can practise the leg extension WITHOUT any distraction 👇

If you perform Mawashigeri as you do in basics, you have to not only mind the extension of your leg, but also your balance, axis rotation, hip movement, kamae, pivoting of supporting leg.. etcetera. All of these elements get in the way from focusing purely on the extension of your leg.

For that reason, you can practice lying down on the floor as pictured. This allows you to isolate the extension of the leg and practice without worrying about any of the other things mentioned.

And in case of the instep — it allows you to focus on the form of your foot.

Make it correct. And strong.

One is becoming mahanmi (face your body the side) completely...

...and the other is balance and stability of axis rotation.

When you execute Mawashigeri for basics, you have to open up your hip completely: You should become Mahanmi. This method allows you to focus on this and check at the same time since you have to put your kick straight down after completion.

from the square-meter methods
shiho mawashigeri Use Heisoku Dachi, so that you can prove that your axis rotation and balance is under your control.

Usually in basics you step through or step back, which allows you to correct your balance by adding movement. If you use Heisoku dachi, you cannot hide any balance issues.

Also, it helps you to focus on your Axis movement, because you have no intention to step through or go back. Or in fact follow up with any movement that can hide your inabilities...

Develop your muscles by doing 10 taps + knee raises. Technically, do 2 of those and then Mawashi. In the video, I’m emphasising HOW to tap + add a an additional Rebound Mawashi method.

from the square-meter methods
rebound mawashi

the methods are part of the online course: 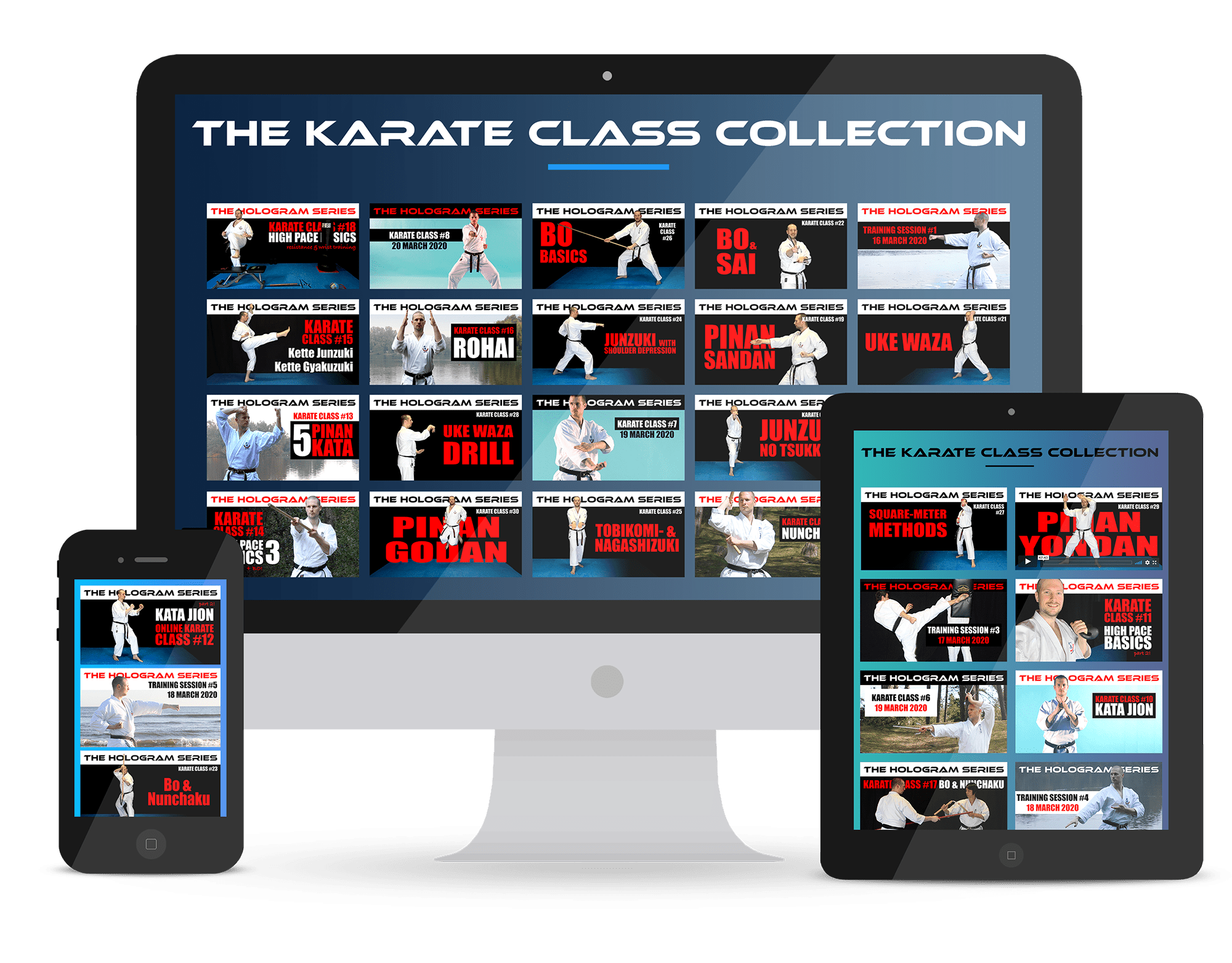 Give the table a nudge, take left stance and practise along with me. You are in control to take fun, effective and energetic classes anytime you want (30+ classes inside!)

Depending on the organisation you're in, they might give you different requirements.

During examination we do about 4 repetitions in each direction. And they have to show these 3 first to show their ability.

And in Wado, that's different from Shotokan 👇